Discussion of Flames of War, Black Powder and other historical games.
Post Reply
10 posts • Page 1 of 1

After the treaty of Tilsit in 1807, the Russian Empire finally made peace with Napoleonic France and so began a period of peace across the continent of Europe, save for minor skirmishes in the Iberian peninsula. Russia even joined the continental blockade against Great Britain.

Tsar Alexander had always been an admirer of Napoleon and it seemed natural that the two greatest powers in Europe should stand together. Gifts in the form of lands in formerly Prussian Pomerania and secret assurances that the Duchy of Warsaw would never be allowed to become an independent Poland sealed the alliance. It was even proposed that Napoleon marry one of the Tsar's sisters following his divorce from Josephine.

However, Great Britain, was not to sit idly by while the 'Corsican Ogre' cemented his control over Europe. Agents at the Tsar's court attempted to sway Alexander from his friendship but were stymied at every step by the Marquis de Caulaincourt and his agents.

The Royal Navy had greater success against Imperial Russia at sea. Nelson's successors ran rings around the the small Russian Baltic fleet, interdicting shipping and launching nuisance raids along the Baltic coast. With each incident, Tsar Alexander became more and more incensed until in the Spring of 1810 he expelled Great Britain's mission from St. Petersburg. In retaliation, the British sent a frigate, the HMS Reliant to bombard the docks of the city of Riga. However the Reliant was caught between spring storm tides and the fortifications of the city and promptly sunk.

The Admiralty was incensed, and as the senior arm of the British armed forces, pleaded with the Prince Regent and the Duke of York to punish Russia for what they they saw as unwarranted aggression. At first reluctant, The Prince Regent finally gave way to persuasive arguments of his commanders and sanctioned a punitive expedition against Russia, centred on her Baltic provinces for that summer. A force under the command of the Lord Latheron was dispatched to land and besiege Riga and exact 'compensation' for the loss of the Reliant.

And so it was that in early August 1810, British forces landed unmolested on the Russian coast, covered by the guns of a vengeful Royal Navy. The Russians for their part were aware of Britain's general intentions but were surprised by the landings. However, a small corps (in reality, no more than a reinforced Division) was hastily assembled from regiments stationed in Baltic provinces and sent to observe the British, intervening only as necessary. The leader of the force, Prince Priorski had other ideas however and aggressively shadowed the British forces, harrying their outposts with his light cavalry.

Events came to a head when several squadrons from both sides clashed outside the town of Tsoyohaski near Riga on August 13th. While there was no clear winner to the cavalry duel, the intentions of both sides became clear. There would be a battle, diplomatic efforts be damned.

On the morning of August 15th, the main forces of both Armies came together outside Riga. The day dawned clear and hot. The two armies formed up across the Riga road and as the bells of a nearby Orthodox Church rang out for morning services, battle was joined.
Morituri nolumus mori!

Good luck to the toy soldiers ready to do their duty for their King/Tsar and country. I eagerly look forward to reading whether the Bells of London or Moscow will ring in trimph.
Models Painted, 2019
32 28mm miniature
1 walker
Top

Read what happened on my fledgling blog here... 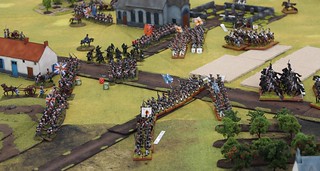 Mike the Pike wrote:Read what happened on my fledgling blog here....

Y'know, if you're too lazy to post a preview pic of your blog contents, then I'm too lazy to click the link.

I read the battle report last night. I really enjoyed the writing. Too bad for the Russians, but it sounded like there was glory for both sides and it was a close battle. Those are the best ones.
Models Painted, 2019
32 28mm miniature
1 walker
Top

Why yes. The C-in-C is Prince Andrey Bolkonsky, Brigade commanders include Count Pierre Bezhukov and Nikolai Rostovand so on. At least someone gets it (I assume)

Mike the Pike wrote:Why yes. The C-in-C is Prince Andrey Bolkonsky, Brigade commanders include Count Pierre Bezhukov and Nikolai Rostovand so on. At least someone gets it (I assume)

I like the homage. With Dolokhov in command, things shouldn't ever get boring!
Models Painted, 2019
32 28mm miniature
1 walker
Top

And here I had just assumed that you had chosen the names of historical commanders, but instead you have plagarised a great man's work. For shame!