Regular (and irregular) events in the Nagoya area can be posted up here. If you want to get your gaming fix, this is the place to look first.
Post Reply
30 posts

@Kenatu
If your friend will come, we can have a morning game with him.

@job
It seems we will have a match later.
Top

@asch I just checked and my friend said he won't be able to make it so that's one less 40k player.
Top

@Karantu - What are you bringing for 40k? Asch and I will probably both be playing Marines, so perhaps we can ally against you for a 3-player game?
Top

@Auxryn Probably Chaos Space Marines. I could try and bring 2000pts if thats the case.
Top

It would be wonderful if you can bring that many points!

Aeronautica Imperialis is a fun game, there's a lot of depth in that manoeuvre system but having to make decisions while executing them provides a valid and interesting differentiation to Xwing. Thanks for the game, Karantu!
Top

Even with the hex based movement it still had quite a bit of depth. The faction balance seemed to be in the favour of the Imperium but different missions and upgrades might fix that.
I'll probably bring the Aeronautica Imperialis stuff again and hopefully they'll be painted by then.

@Auxryn I had fun with the 40k game as well. It was a relatively close game and I would like to see how much the Salamanders supplement changes things.
Top

Back of the envelope looks like I have about 1500pts of Space Marines (if desperately short of Troops since that is not a thing in Kill Team ^_^), so if next time more people are looking to play the big game than the skirmish games I should be able to throw together something playable.
Top

Here are some pics from our Rangers of Shadow Deep game. This is the 3rd scenario in the introductory series. The goal is for our heros to sneak/fight to the other side of the river and loot/find clues in the gnoll camp. We got half of that done but got good and beat up doing it.

Here is the bridge. Unfortunately, my big, beautiful stone bridge is quite tall. Thus, the gnolls had good LOS and our "strike silently, melt back into the shadows" was a not go. Charge! 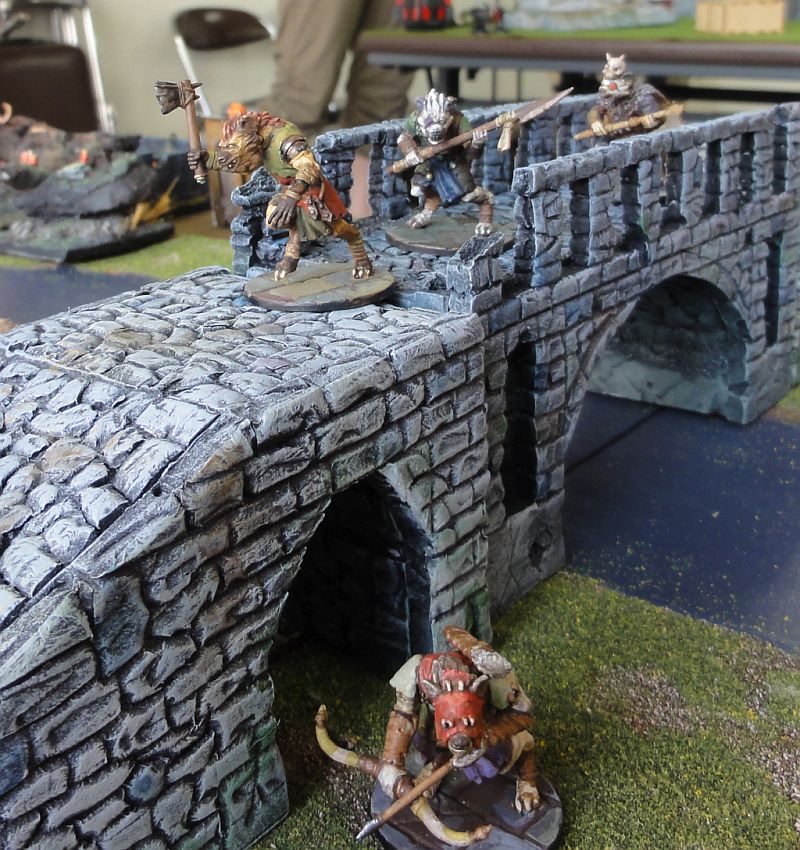 Here is one of Itakura's Gnolls. Look! He brought lunch. 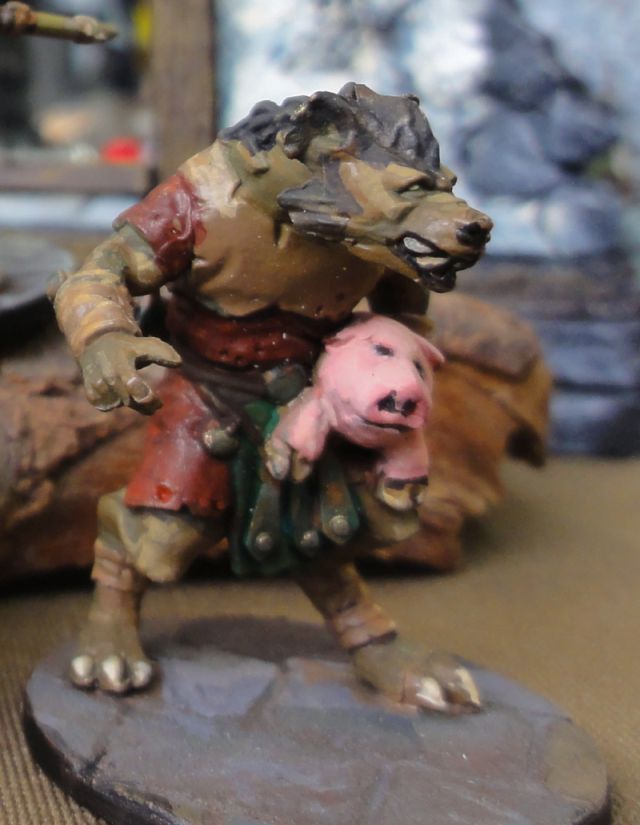 Kari the Huntress faces off with the Gnoll Sergeant. A battle so epic it gets shaded sepia. Actually, I painted Kari in monochrome as an experiment, so she really looks like that. 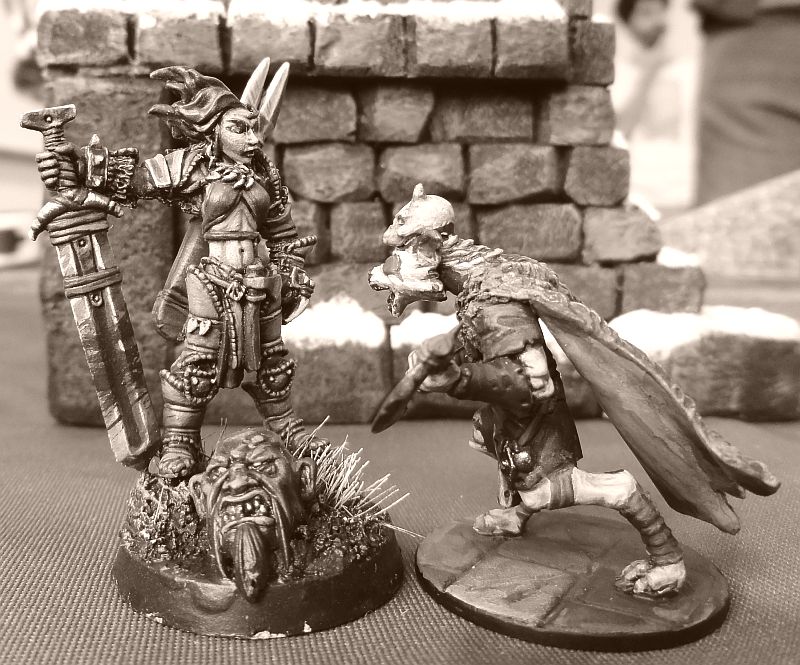 And the heroic Spuds! On three. 1,2.3 kawaiiiiii...... (That's the dog, not the ranger.) Spuds just kicked Gnoll butt right and left, but fell defending the bridge. Don't worry kids! Spuds is okay! He was only hurt a bit and has to sit out the next game. He fell off the bridge and was washed down the river, to be found by a young boy and nursed back to health in the most heart-warming, boy-and-his-dog story ever imagined. 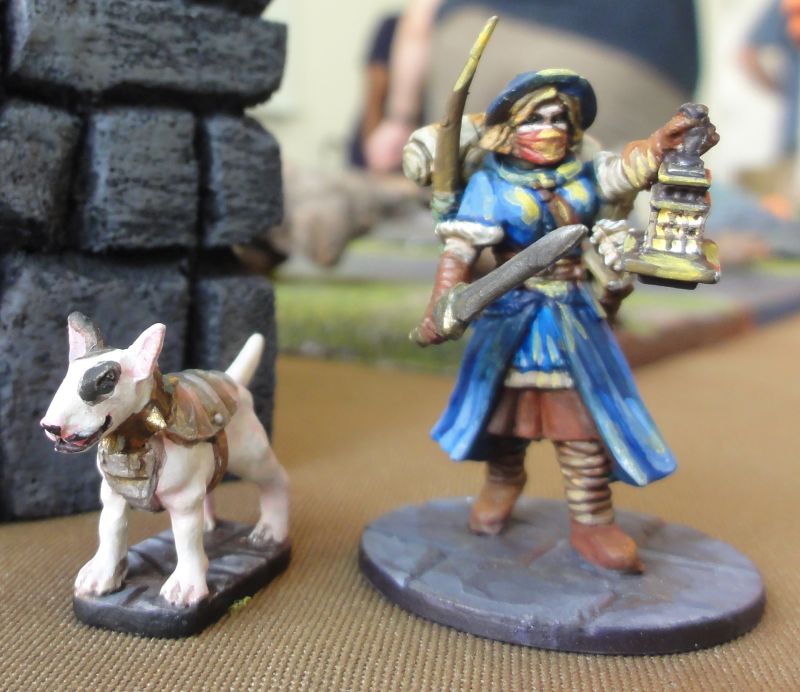 And the game's MVP. Underdweller's Ranger has a special leaping ability. Who needs a bridge anyways. He vaulted across the river and found the secret scroll we were searching for, but abandoned the treasure to draw off a gnoll attacking Itakura's wounded Ranger. Thus saving him, but falling in his place. Brings a tear to my eye, this stuff. Again, don't worry kids. "Leapin' Larry" will be back next episode! 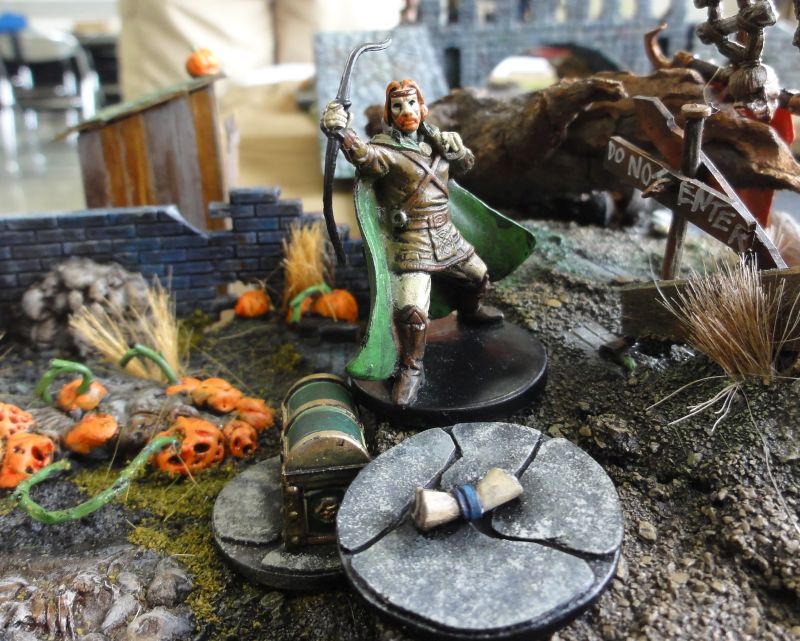 Rangers of Shadowdeep is a fun game. Really relaxed. Has a feel between D&D and a "Choose Your Own Adventure" book. I really need to expand my terrain collection. Next scenario has dungeon stuff. I need to build some barrels and crates, chairs and tables, weapon racks and torture chamber/wizard's lab bits.
...and now his Head was full of nothing but Inchantments, Quarrels, Battles, Challenges, Wounds, Complaints, Amours, and abundance of Stuff and Impossibilities.....
Cervantes, Don Quixote
Top
Post Reply
30 posts