Jye Nicolson wrote:We'll be in trouble if Crusade gives bonuses for best painted.

Any bonus for painting will be counteracted by the "Dave is Bad at Wargaming" penalty, so nothing to worry about.

It's OK, you can blame your dice, I have seen enough to believe.
Top

Disclaimer: this post contains negativity and rantiness! You have been warned...


Sooooo, GW must’ve seen my earlier posts* elsewhere on these august forums about how there hasn’t been any new Eldar models for the craftworlders (or indeed harleys or dark Eldar) for years and years. I mean, correct me if I’m wrong, but the most recent new (ie not resculpted) Eldar models of any kind were the Ynnari, no? So, I see on their social media that there’s finally a new Eldar character sculpt. Hurrah! Except...

It’s for the Imperials.

The model is new but the character isn't is the story as I understand it. He's just along for the ride with a bit of a Sisters push.

Fingers crossed for an eventual Eldar refresh ala Sisters and Necrons though. It sort of feels like for everything outside the Primaris rollout, you get love very rarely from GW but when you do it's overwhelming.
Top

I’ve seen a lot of folks on social media saying “yes, he’s an established character who’s been in the lore for a while now” as if that’s some kind of justification for making a model of him. There’s...quite a few Eldar characters from the lore who could use a model before some dude that hangs around with the Mon-Keigh starts deserving his props. Lady Malice, Baron Sathonyx, Asdrubael Vect, Iyana Arienal (edit: bloody Eldar spelling

), Arhra (could be counted as a resculpt, I suppose), Drastana, Nuadhu Fireheart. Harlies, to be fair, don’t really do named characters, but god knows they need some more units. Some kind of Harley wraithguard/lord/knight thing would be cool. Or a big hover-stage would be awesome (with all light show lasers and smoke machines and stuff all over it

Anyway, point is: there’s plenty they could’ve done with Eldar, even without just plain making something new up (which is kiiiinda what their job is, no?).

I will remain disgruntled until they release something for any of the Eldar factions that makes me go “I don’t have one of those already. I want to buy that because it’s cool.” It’s been literally years since that’s happened, and I’m a proper Eldar fanboi who will buy most anything (case in point: I own a Corsair army. And a titan.)
current (2019) hobby interests
eh, y'know. Stuff, and things
Top

me_in_japan wrote: ↑
Mon Jun 29, 2020 6:36 am
Anyway, point is: there’s plenty they could’ve done with Eldar, even without just plain making something new up

Sure but I don't think "doing something with Eldar" was the goal here, it was "make a model for Stern's offsider". If the authors of Daemonifuge had made Stern's buddy an Ork back in the day, we'd have a new Ork model this week

I understand your legitimate desire for new Eldar stuff (they'd be one of my top picks for a Xenos army to collect if there was a comprehensive Aspect Warriors rework, my nostalgia for them from 2nd edition is second only to Wolves), but I don't think you're going to get much satisfaction until the wheel of refresh lands on the Aeldari. I see Eldar fans getting salty *in detail* at new releases (like getting angry about new melta Primaris being better than Fire Dragons), which just feels like a good way to be miserable. It sucks to be waiting on the spotlight but on the plus side the last couple of refreshes have *really delivered*.

I think that there's an argument to be made that it would have been trivially easy for the rules folks to make this model fieldable in an Eldar army, and the number of people who would then have been happy to be able to use a cool Eldar model in their Eldar army is probably several orders of magnitude greater than the number of people who would have pushed their glasses up their nose and said, "well, actually, the lore says..." (which, not having read the book, is the only reason I can think they made him Imperium-only).
Feel free to call me Dave!
-----
Miniatures painted in 2020:
AoS-iverse: 87 infantry
40K-iverse: 39 infantry, 1 monster, a whole mess of terrain
Adeptus Titanicus: 1 Titan
Top

Got started on a bloat-drone for my Dusk Raiders - I'm going to town with chipping and rust effects (the justification being that they don't worry about the paint job on the daemon engines as much as they do their own armor) and it's been a lot of fun. Makes me want to hurry up and do those rusty Legio Mortis warhounds, but first I gotta get my core DR force done for 40K just in case it drops before the next games day.
Feel free to call me Dave!
-----
Miniatures painted in 2020:
AoS-iverse: 87 infantry
40K-iverse: 39 infantry, 1 monster, a whole mess of terrain
Adeptus Titanicus: 1 Titan
Top

I am pretty sure the next game day is the day *after* 9th ed releases so getting your prep in is worth it!

I had planned on taking a breather from painting - I don't actually like it much and don't want to burn out with the Sisters backlog looming - but today there was a long webinar and after work the Giants/DeNA game blocked the PS4 so I figured I'd at least hide the primer on some scatter terrain. 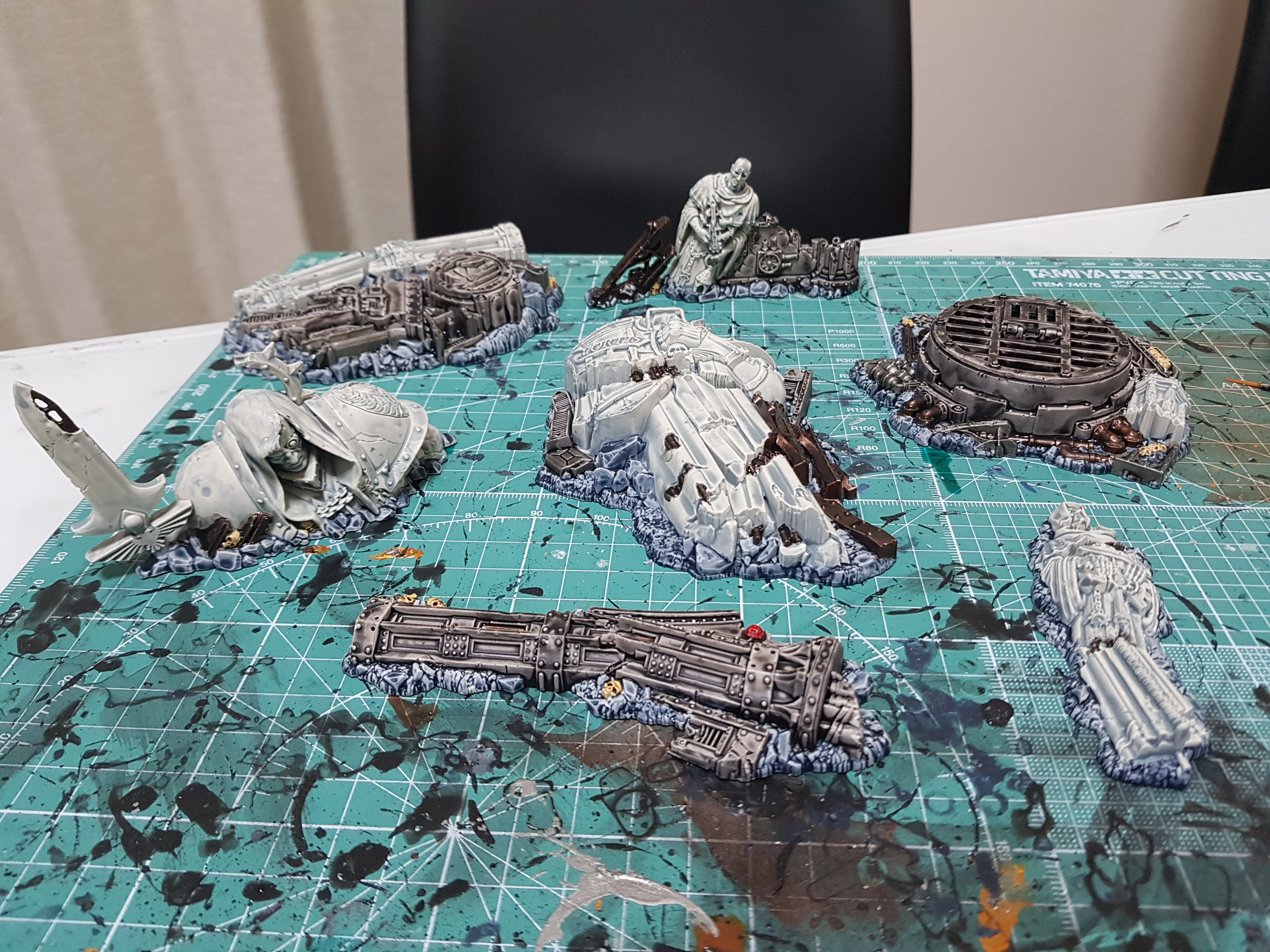 Terrain is good, and that set seems to take Contrast well! Reminds me that I have a couple pieces in the huge pile of MDF I got at the end of the year to paint up. That'll go in the queue after 25PL for Dusk Raiders are done!

(I really hope I'm not overhyping Crusade / Combat Patrol in my mind, I tell you hwat. All I want is a WarCry-esque narrative campaign for small games of 40K - they can't possibly screw that up, can they?