@TOD- Love those Cultists. Great casts. I wish I had time to do a Cult Army.
What I have had time for are VIKINGS! Whew.... Now back to the Diggachicks. 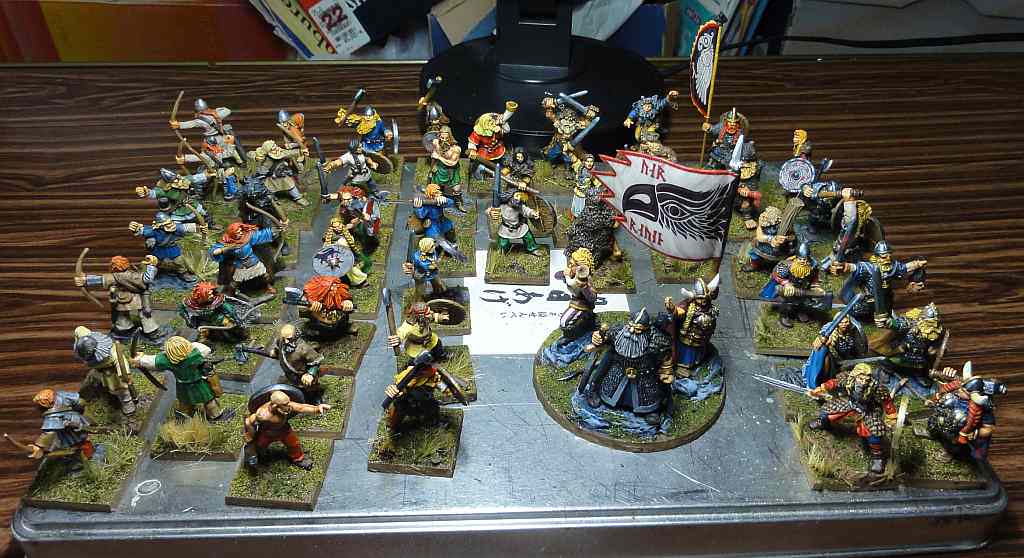 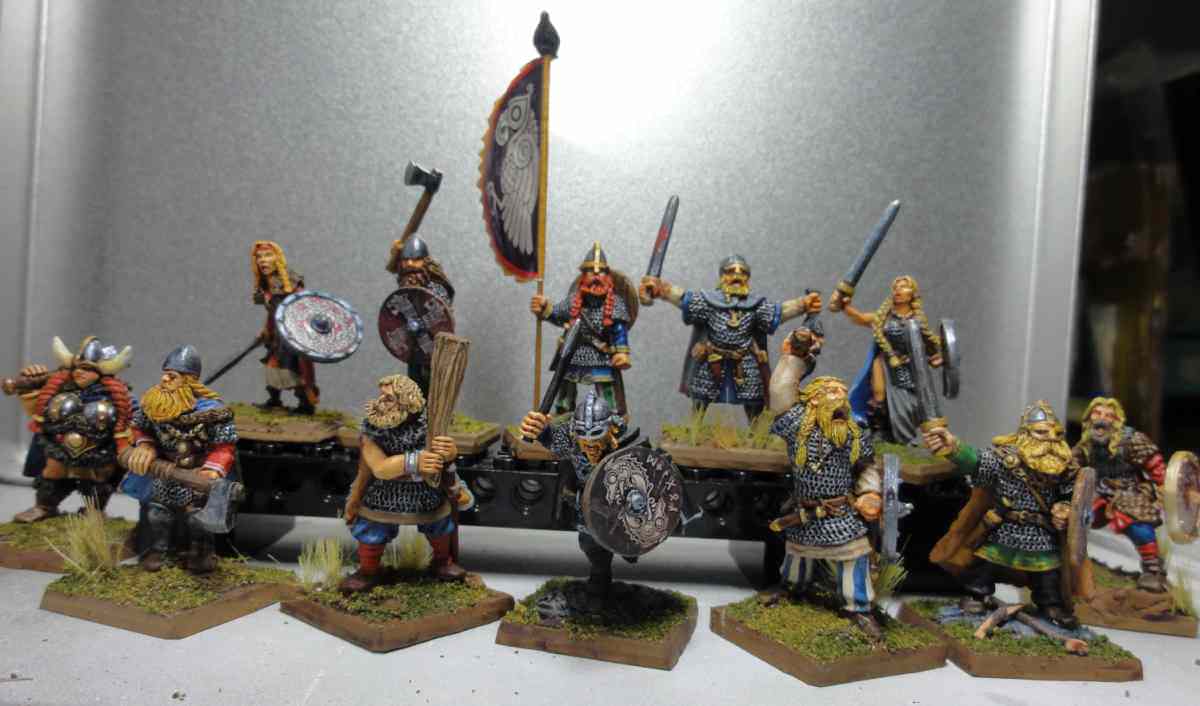 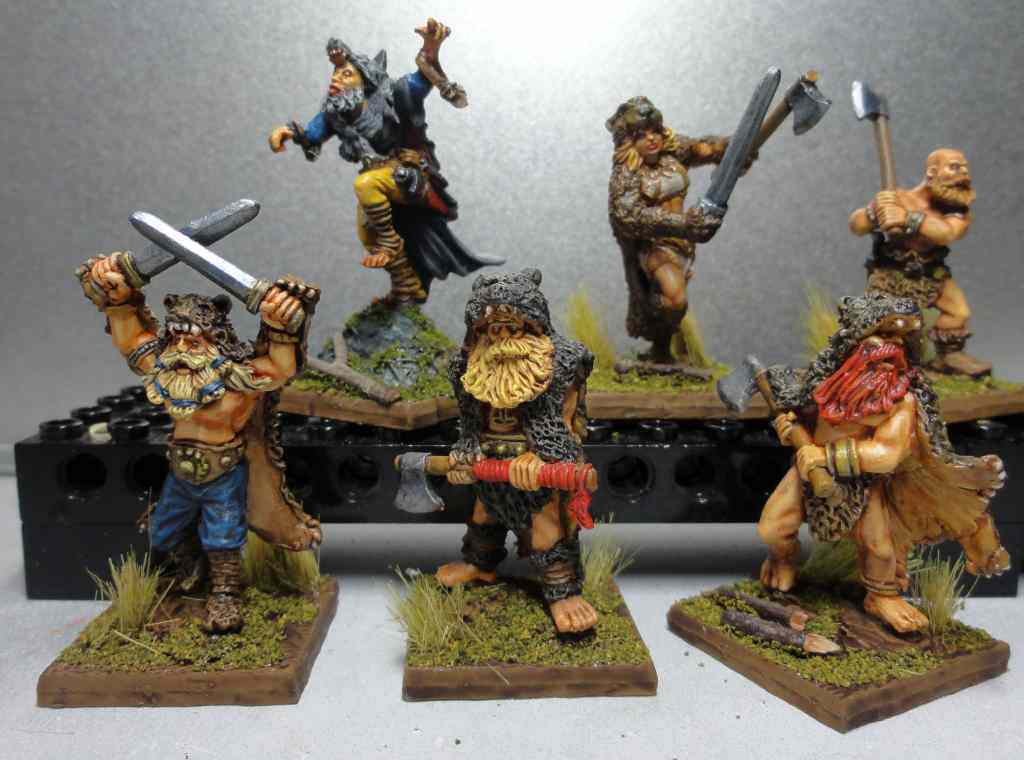 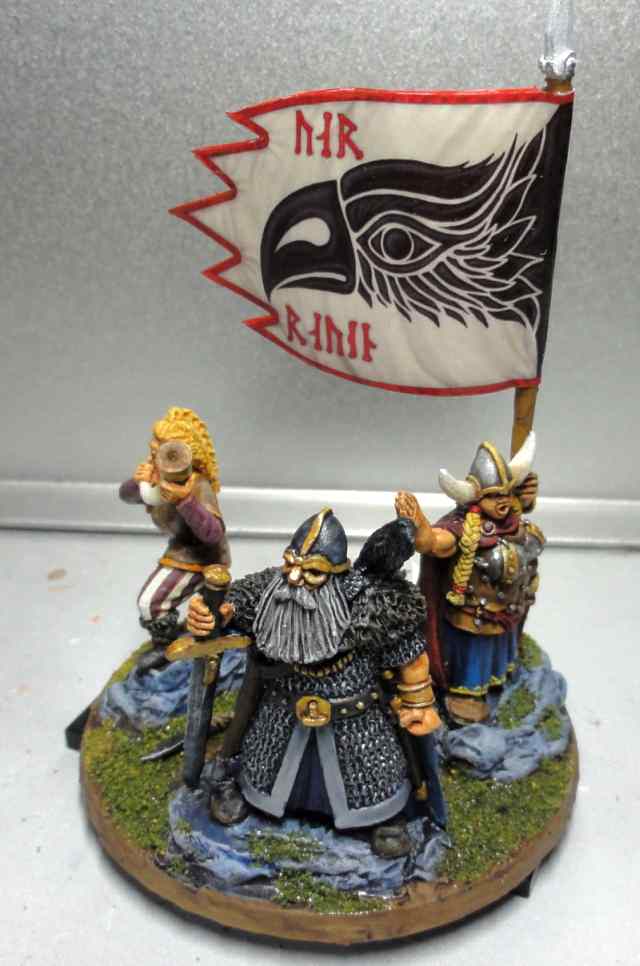 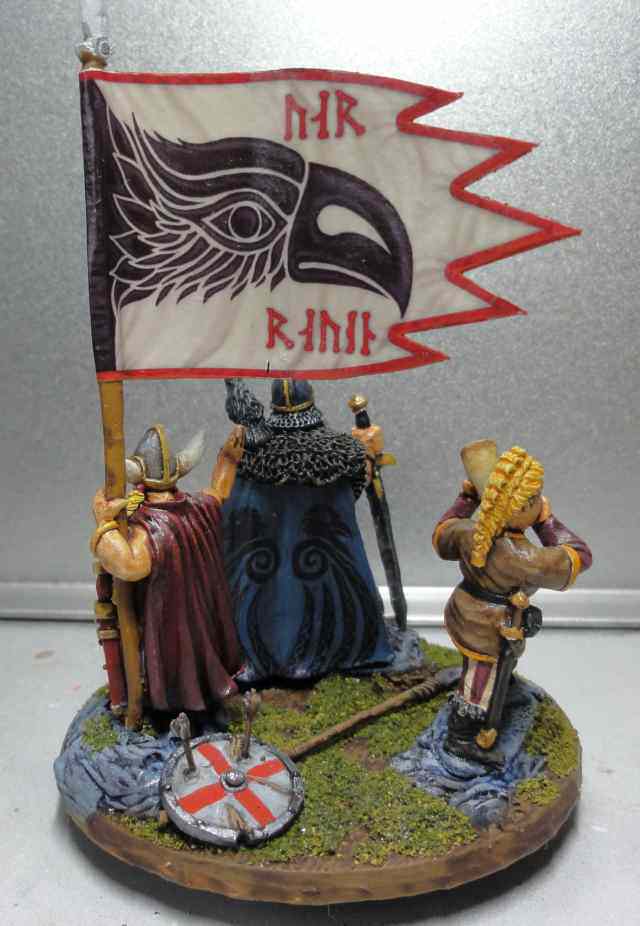 @Konrad - Great stuff! Tempted to do a few of your own by any chance?
@ToD - Looks like you're all set to begin the uprising.
@J-R - The Thousand Sons ship looks great. I like the flame effect.

Just caught up on what everyone has been up to. This thread is so great for that. So much great work from everyone.

I Haven't been able to do much hobbying of late, but I got a toe back in the water on Sunday night. I got started on converting my Dark Age warrior box set into viking archers with the bows I kindly received from Prim. It is a bit of a challenge, but am happy with the 4 I done so far. 8 more to go, so I am a third of the way through - glass half full, eh!

Hope everyone has had a good start to the week.
Top

17 British for Afghanistan (+1 which was already finished, but I redid the base). 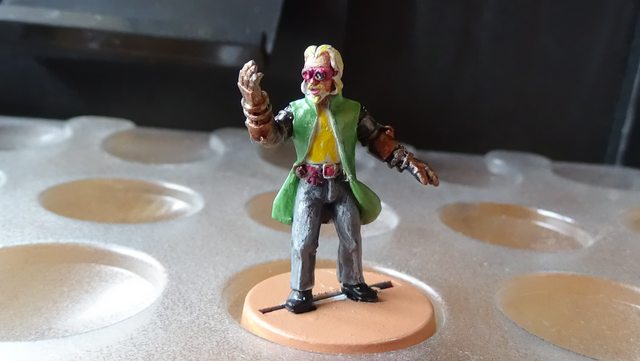 So....I've decided to take my work back underground.....to stop it falling into the wrong hands.
Evil Mastermind.
November 1st 2017
Forget about yesterday, don't worry about tomorrow because all that matters is today.

So I did a (maybe) interesting thing today. A wee experiment, actually. My kids were wanting to paint, so while they were doing so, I figured it might be fun to see if I could finish a mini in the time it took them to do one. 45 mins later, this is the result: 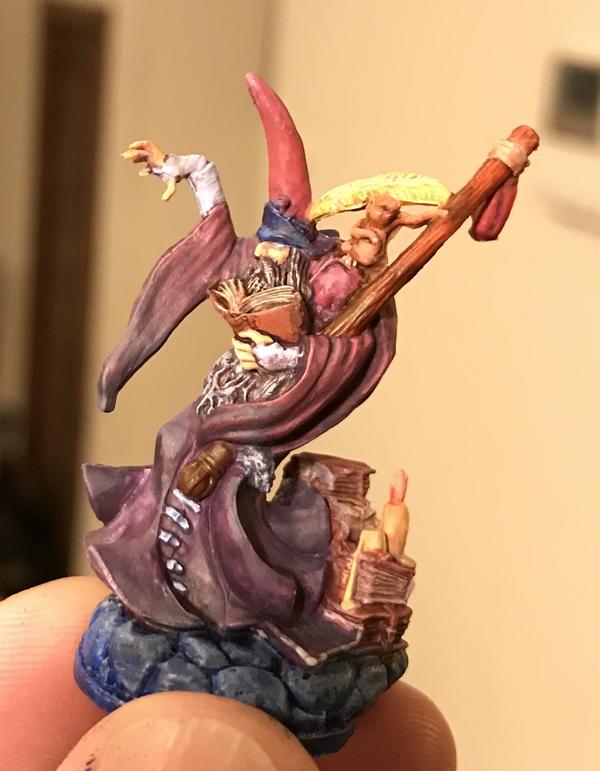 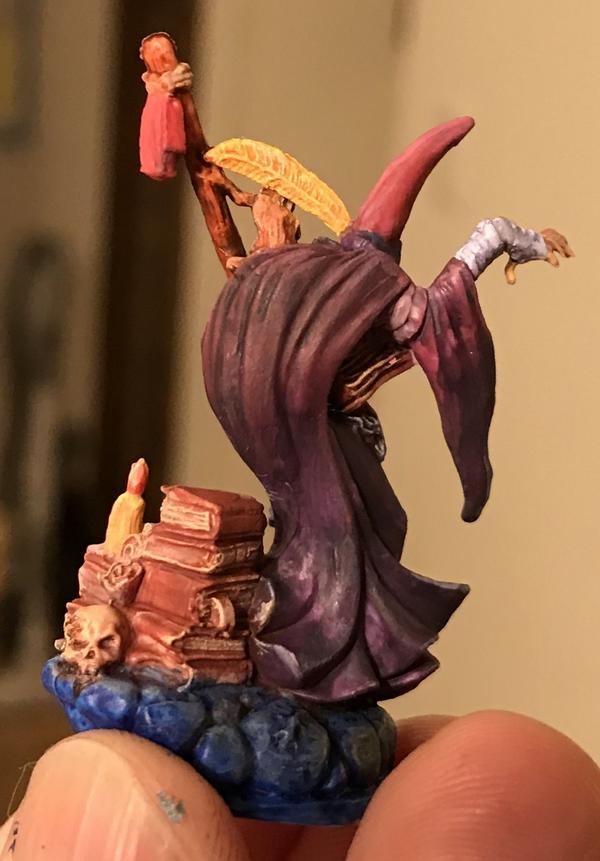 It's a Bones mini, so no harm done, but tbh I reckon it's serviceable enough. I might try doing this every week or so and see if I can improve any. Also, in my defence, I was using an old mucky brush that I usually use for drybrushing, and was limited to the paints I had put out for the boys (dark blue, fuscia (now my youngest son's new favourite word), dark flesh tone, kalahari orange, ivory, mahogany, pale blue grey and yellow. Oh, and gold and silver, cos damn them kids love their metallics

Anyway, it was fun

I finished my Adeptus Titanicus sets - all six titans, plus the buildings: 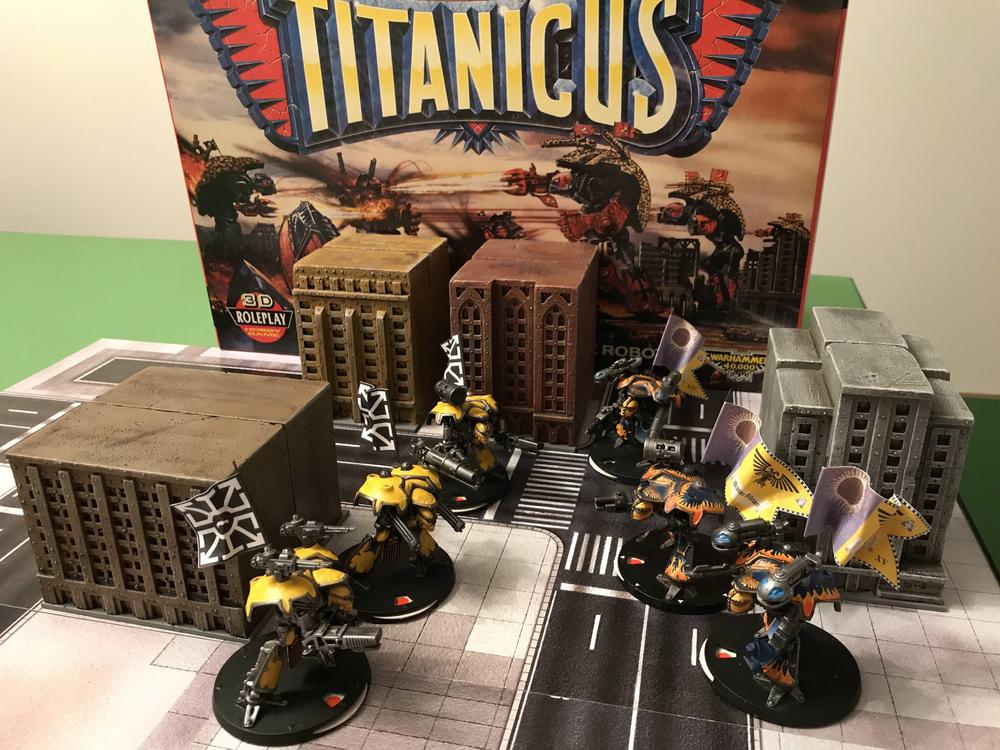 @AGP - That's a nice looking collection of nostalgia you have there.

@M_i_J - 45 minutes? Wow, if that's what you can do with an old brush and some random colours... My hat is off to you sir. Very impressive.

Yesterday I took a trip down to Pikey's Secret Base and played a couple of games of Malifaux. My Hoffman crew (Guild) took on Pikey's Lilith crew (Neverborn) and then his Misaki crew (Ten Thunders). In the first game Hoffman's supercharged death-bots stomped a mudhole in Lilith, though Nekima was able to chop up Hoffman in exchange. To avoid meeting a similar fate, Nekima pushed the Guild constructs away, which allowed them to reposition for some schemes. In the second game, Misaki came out swinging, quickly killing my henchman and one of my constructs. However, she was unable to put down the Peacekeeper before it pummelled her into the ground.
In fairness to Pikey, it was his first game with Misaki and it was a fairly straight out of the box crew. Lilith had me sweating at times, a couple more high cards and she would probably have won. As it stands, Hoffman's crew is very tough and packs a fair amount of healing, armour and defense options while hitting very hard when they want to.
Painted Minis in 2014: 510, in 2015: 300,
in 2016 :369, in 2019: 417.
Top

Not so much today as last Friday, Koji came over to my place to give Dead Man's Hand (http://www.greatescapegames.co.uk/dead-mans-hand) a go.

In the opening scene, a group of Koji's drunken ne'er do wells gunned down a stranger in the middle of the town street (although the stranger did take down one of his assailants in the process).

In the next scene, upon realizing the stranger was the Sheriff's cousin and a posse was bound to come after them, the Sugar Hill Gang decided to strike first at the deputies - ambushing them as they investigated the heinous crime. The deputies came off the worse for wear...

In the closing scene the conflict had escalated to all out war with the Sugar Hill Gang attacking the town of Goodwater and trying to rid themselves of all the local lawmen. An incredibly bloody gunfight saw the US Marshall's head quickly blown off; but the local Sheriff gun down one rascal and gut two others with his bowie knife before being killed. The lawmen eventually gained the upper hand with a 3 on 2 advantage when the Sugar Hill gang's gunslinger whipped out his sixgun and blew two deputies away (and almost killed the 3rd in the same action) -- unfortunately for the gunslinger, he caught some lead in guts for his trouble leaving just 2 men standing - one from each gang.
Casting aside their pistols, the last two men charged each other in the centre of main street and the villainous varmint came out on top...the last man standing in a town soaked in blood from the two 7-man gangs that started the fight...
On the painting table:
Bolt Action Narvik Army
Necromunda Gor-liaths
Walking Dead Survivors/Zombies
Zombicide base set (so many zombies!)
Test of Honour Samurai
Rangers of Shadow Deep Rangers+Monsters
Astral Hams BigMarines
Top
Post Reply
9323 posts