Primarch wrote: The models are all from a company called Footsore minis.

Primarch wrote: The models are all from a company called Footsore minis.

Well I'm back in the US and back to having painting facilities. It's almost a little daunting picking up a brush again after almost 3 months.

I've started assembling some of the ashigaru from test of honour (prim you were right, they're a bugger to assemble!) and starting basecoating 18 more Zombicide zombies as I have a game at the end of the month and would like to have the entire base set completed by then (that still leaves me with like 100 more zombies from the expansions....!)

I did built my first Plast Craft buildings, they are a mix of pre-printed foamcore and mdf. I'm quite impressed with how they came out and have ordered a couple more. I'll post some pics soon.
On the painting table:
Bolt Action Narvik Army
Blood and Valour Gallipoli ANZACs
Fantasy Savage Orks and Empire troops
Warhammer Quest The '95 original!
Top

Finished up the Thorns of the Briar Queen for Shadespire this afternoon - now back to Blackstone! 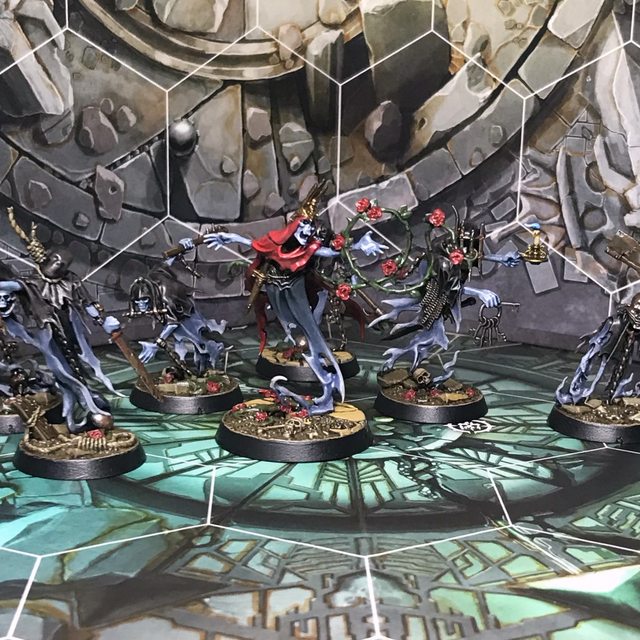 (The one thing I like about the Briar Queen herself, that no pictures really do justice, is just how three-dimensional the model is. It's an impressive piece of miniature design, especially considering it's easy-build.) 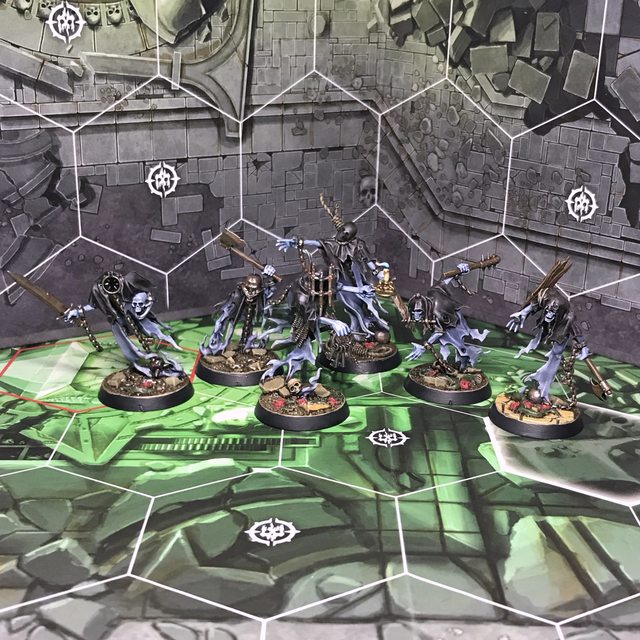 Spooky! I'm not sure when in the painting process I decided to do their ghosty bits with hand blending instead of the GW-recommended "white undercoat, spooky blue or green wash" recipe. They turned out well, but if I was going to have to paint 40 of them, yeah, washes.
Feel free to call me Dave!
-----
Miniatures painted in 2020:
AoS-iverse: 98 infantry
40K-iverse: 90 infantry, 2 vehicles, a whole mess of terrain
Adeptus Titanicus: 1 Titan
Top

@prim : BLOOD EAGLE! Did they really use to do that? The blood effects are sublime. Did you mix the tamiya clear red with anything to get it? I hear tell that stuff is good for blood.

@tod: Fan...tastico! You are really working overtime on those
Top

jus wrote:@prim : BLOOD EAGLE! Did they really use to do that? The blood effects are sublime. Did you mix the tamiya clear red with anything to get it? I hear tell that stuff is good for blood.

The viking sagas are about 50-50 actual events and stuff that was probably made up but sounds cool. Real events such as major battles, invasions and discoveries are often found in other nations' histories as well, usually because they were the ones being invaded. Sadly the Blood Eagle can't be proven. There was only one non-viking present and he wasn't in any condition to take notes. So maybe it's true, maybe it's made up and maybe it's just a mistranslation of a really old recipe.

+1 for Tamiya clear red. My dark eldar wouldnt be the same without it. For added fun, dip an old toothbrush in it and flick the bristles at anything you want covered in gory splats.

Some weird looking little tanks for Battletech I finished off recently. nice wee tankettes there, Prim. Some nice designs, actually - I do like a nice sci fi tank design.

I've actually been dragged away from mtg arena these past few days, as I've been given a new commission (two, actually, but the second is pending). Two woodsies and a treeman for blood bowl, which should be nicely different to each other. I'm quite looking forward to it, actually. At the mo, no pics, as they are somewhat uniformly black undercoated, but hopefully I'll get up some wip pics over the next couple of days

also, one other drag-away-from-mtgA factor is that I actually went and got Hulu. Only a trial just now, but I anticipate holding on to it for a couple months, at least until I've exhausted the doctor who options with my kids, and GoT for myself. I've started watching Ash vs Evil Dead season 3. Not quite as mental as S2 (I dont think anything, ever, could be) but still the same level of silly gore we know and love. I was watching it on the telly in the living room while my wife was studying (I had headphones on) and I realised she had looked up from her book and was staring at the (silent) TV screen. I thiiiiink at that point Ash had just jumped in a coffin and was being sexy-stalked by a deadite, whose head he then pulled off, but regardless, mrs MiJ seemed discombobulated. I assured her it was funny, and she gave me...a look*.