Recently I have had a bunch of minis sitting on my painting desk at the 'almost finished' stage. A couple of hours work should see them done. So last night after work... I went home and played Mordheim on my PC.

I know I should get back to my brushes, but the game is starting to grow on me.

Mordheim is pretty brutal, it regularly auto-saves to a single file, so after a devastating loss you can't roll back to a previous game state. Instead, it gives you (the player) experience points for completing certain in-game activities and goals. Once you have enough to level up, you get a permanent bonus to all your warbands from that stage on. As the RNG algorithm is not particularly forgiving either, most games seem more like a survival game than anything else.
The game has a set of randomised missions that you play through on a regular basis and scenario based missions depending on your faction mixed in with them. In addition, your warband's patron demands a certain amount of wyrdstone every so often. Fail to meet the deadline a few times and it's game over as well.

Overall, the game is enjoyable even if the randomised missions can be a little repetitive. Seeing your warband sneaking through the ruins of the city in glorious 3D is great. It gives me a real hankering for building a full Mordheim table, blowing the dust off the old rules and running a few games.
Painted Minis in 2014: 510, in 2015: 300,
in 2016 :369, in 2019: 417.
Top

@ToD - Well done sir, and glad you had a great time geeking out with like minded fellows and lasses.

@Primarch - Sounds like a cool game, but is quite demanding and brutal for the player. I guess that gives it longevity.

I would love to play some Mordheim on the table with you at some point.

Today I made it to mastery level 100 in Magic Arena. Yay me!

Actually, I am quite pleased, as it's been an ongoing thing for over two months now, and the progress resets in 3 days, so it was all a bit girigiri. Clearly, though, Wizards are watching people's progress, as they dropped a free 5-level bonus promo code on the community a couple days ago, so I guess they want people to complete it and a fair number of them weren't quite going to make it. Much like me

In other news, I've been painting my ghosts for Shadespire. I'm actually feeling fairly inspired to paint recently. I finished one yesterday, and got all the turquoise bits done on two more today. They're pretty simple (just turquoise, orange and grey, really) so I'm kinda hoping to finish those two tomorrow or the day after, depending on my son's undokai. Anyway, progress, and stuff

I finished up some more minis for my Dwarven force for Dragon Rampant. (Thanks to Job for the figures. The metal artillery crew especially were awesome to paint).

Some Artillery and Crew.

And the Engineer is meant to accompany the little battle-mechs I posted previously.

Primarch wrote: ↑
Thu Sep 19, 2019 10:00 pm
It gives me a real hankering for building a full Mordheim table, blowing the dust off the old rules and running a few games.

Love Mordheim! How about in October? We used to do a big, multi-player "Blood on the Streets" game round about Halloween there back in the day. My Undead have been resting in the crypt for some time.......
...and now his Head was full of nothing but Inchantments, Quarrels, Battles, Challenges, Wounds, Complaints, Amours, and abundance of Stuff and Impossibilities.....
Cervantes, Don Quixote
Top

Primarch wrote: ↑
Thu Sep 19, 2019 10:00 pm
It gives me a real hankering for building a full Mordheim table, blowing the dust off the old rules and running a few games.

Love Mordheim! How about in October? We used to do a big, multi-player "Blood on the Streets" game round about Halloween there back in the day. My Undead have been resting in the crypt for some time.......

I settled down last night for an hour of hobby, the 2nd time in a week. I decided to mount and base some Hessian Jageurs. The Perry sculpts are great.
Models Painted, 2020
70 28mm miniatureS
Top

Finally finished up the WarCry terrain - it was a pretty busy couple months so I didn't have a whole lot of time to really sit down and paint. Still! It's nice to have a terrain set all done up well, and it'll work just as well for Kill Team to boot. 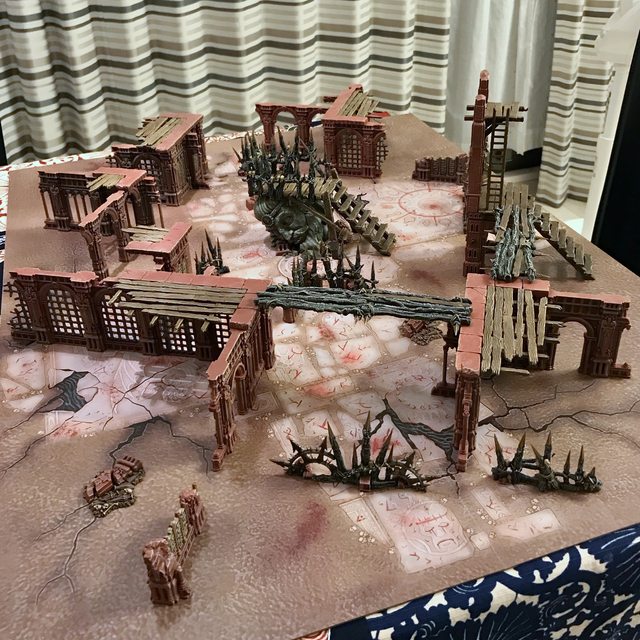 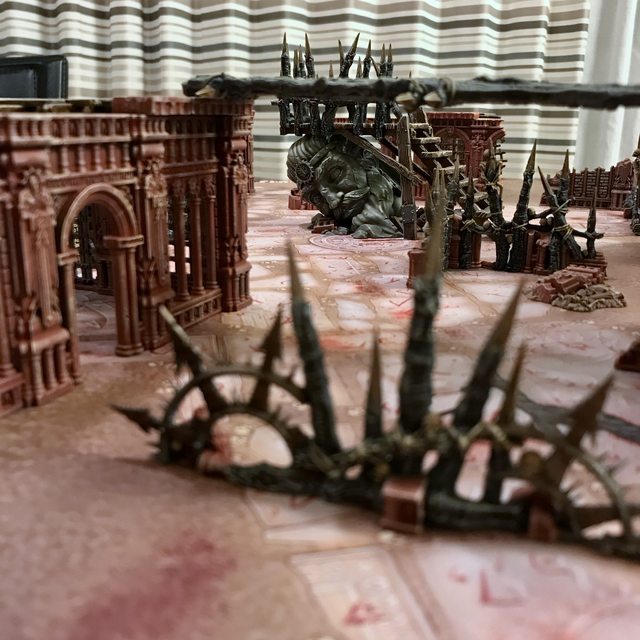 (It gets usability points over Kill Team for being low enough to actually fit in the box, which is nice for transport.)

The current plan is to paint up some goblins I need to round out my Gloomspite warband for said game by a week from Sunday - it's certainly within my "on-the-ball" painting abilities, so it'll just depend on how tired vs. motivated I end up.

@Konrad - I put together and undercoated a Mordheim warband. I should be able to get them painted by the games day.

@Job - The dwarves' long journey is at an end. I'm looking forward to seeing your Hessians.

Primarch wrote: ↑
Thu Sep 26, 2019 1:03 pm
@ToD - Do the terrain pieces stack? The second floors look quite open, probably not the best place to be standing if the enemy has any ranged weapons. Congratulations on completing it all.

Thanks! They stack in the sense that the log-and-rubble walls fit on the edges of the second levels very nicely - probably what I'd do if I used it for KT.
Feel free to call me Dave!
-----
Miniatures painted in 2020:
AoS-iverse: 87 infantry
40K-iverse: 29 infantry, 1 monster, a whole mess of terrain
Adeptus Titanicus: 1 Titan
Top
Post Reply
9321 posts