I played Space Wolves as a young fellow long ago, so when I got back into the hobby with Kill Team I knew I wanted to play them again for maximum nostalgia. But Kill Team didn't *have* Space Wolf rules so I just ran them as the best melee team I could find - Deathwatch. Even when Space Wolf rules were printed in Elites it made sense to take advantage of the roster system to use more than one chapter, including having the same model occupying multiple slots on the roster to be different chapters for different games. So the base that I'm expanding from has been consistent in its aesthetic but all over the place in rules

The current context of 40K is that Codex compliant chapters are awesome - combat doctrines are fun, there's incredible depth of viable units, and if you want to run successors you can still access most of the goodies of the parent chapter in addition to customising your own chapter tactic. White Scars are not as meta-busting as Iron Hands but they're a very fast force where every single unit is dangerous in melee and are buffed by storm themed librarians that can throw chain lightning.

Non codex chapters are not in a happy place in comparison. They got some new units, shock assault and point adjustments, but have yet to receive doctrines, upgraded tactics, relics, stratrgems, traits etc. Space Wolves seem to want to run a lot of Wulfen, which...I don't really want to buy a lot of Wulfen. I still think Space Wolves are cool but the second edition codex that I loved as a kid didn't have Wulfen or marines riding wolves and I have't quite come around on them yet

I may pivot back to Wolf rules when they get a good update, no way to know if that's Psychic Awakening or 9th edition.

So TLDR I think White Scars are currently better Space Wolves than Space Wolves. Also I do own Codex Space Wolves for 8th (bought it for fluff) but I think it's in a box in my home town in Australia.
Top

Fair enough. Marines riding wolves into battle was not one of GW's better ideas, so I can understand not wanting to use them.

Personally I'd rather build and paint the army I like rather than what the rules favour, and relative power level of the codex be damned. (Though I do tend to have multiple forces for most games I play). I don't think the local group is overly competitive or meta-focussed, so it's not worth stressing over too much.

And I finished painting some things. Now, bear in mind that I am not 100% up on AoS terminology, but here are my Introducers. I'm not sure what I am going to use these for as the obvious choice isn't one I'm interested in. They were fun to paint though.

The Eternals with the tabards are indeed pretty nice models, and those push-fit ones are especially cool-looking.

I finished up the first of the Space Marine (Anti-)Heroes series 3 set, a plague flail-er who is apparently named Scabous. 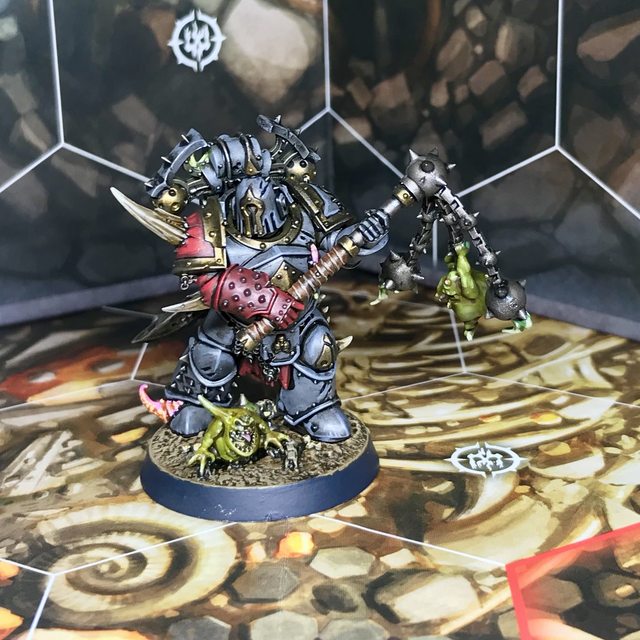 Being the eternal contrarian that I am, I went with the pre-Mortarion XIV legion Dusk Raiders colors, and it turned out pretty well! Now I'll finish up the sky dorfs for Underworlds (they got the same basecoat as this guy, and the same 'Dave's Own Fake Nuln Oil' wash, so now it's just finishing up the cloth and leather on them. Then I think I'll do the second plague marine, and intersperse them with other stuff like that.
Feel free to call me Dave!
-----
Miniatures painted in 2020:
AoS-iverse: 87 infantry
40K-iverse: 39 infantry, 1 monster, a whole mess of terrain
Adeptus Titanicus: 1 Titan
Top

The crossbow ones are good for Warcry (very minor proxying but the only relevant issue in Warcry right now is *size* of crossbow, not magic crossbow vs mechanical crosbow), and their bird-dog is a good unit in its own right.

The hammer ones are straight up an Underworlds team! You'd have to proxy their cards but the miniatures are correct.
Top

Its nice to see some Stormcast that aren't pure gold from time to time. I really like the more realistic colour palette. Although that combination of colours on the Gryph-hound reminds me of a hen.

I managed to make some progress on the Bonereapers. I'm mostly done with the line infantry, I'm just wondering how much more time I want to spend on them. There's still two more Stalkers left and the hero guy has a few details remaining too. I tried something new with the bases, it didn't work out so well for some of the Mortek Guard but I think I've got the hang of it now. 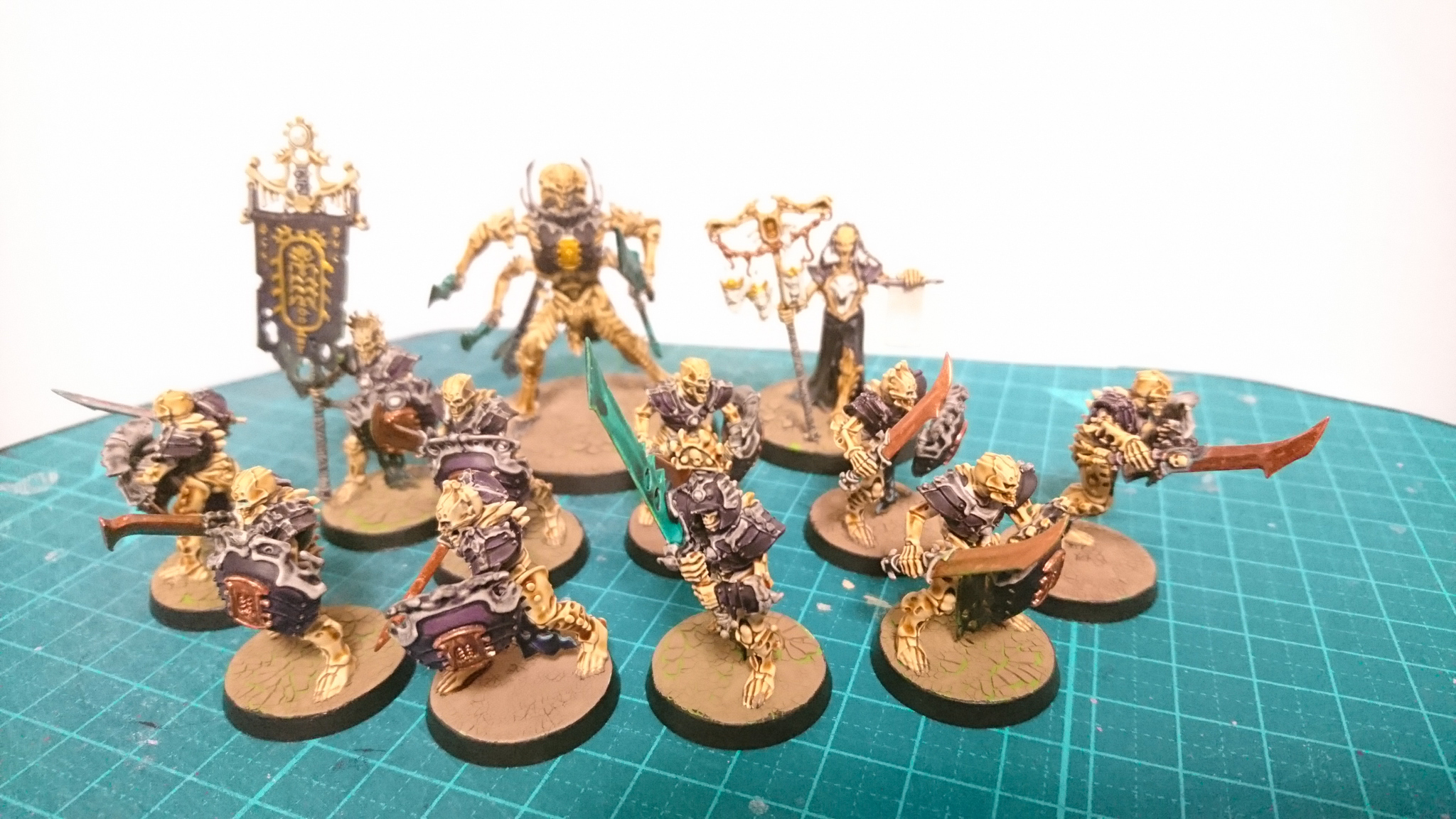 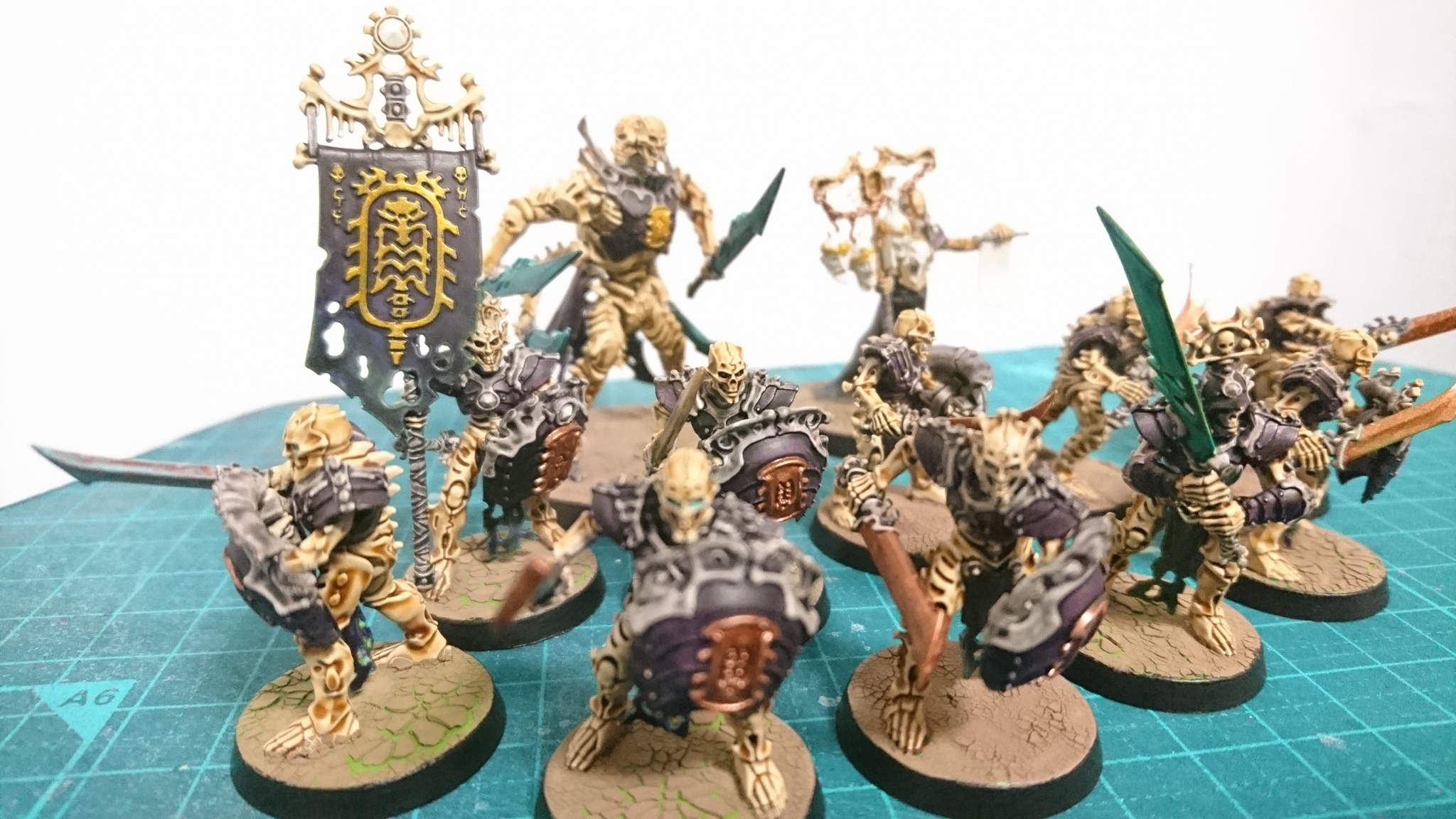 While I'm still not completely sold on the Bonereaper chappies (meh, they are what they are, I spose), your paint job does a good job of pushing me in the right direction. I much, much prefer your choice of kinda old, weathered bone/parchment, as opposed to Gee Dubs' shiny white. The bases are also very effective - proper parched earth effect going on there. Job's a good un, I'd say.
current (2019) hobby interests
eh, y'know. Stuff, and things
Top

You mean it's not some kind of chicken?

I guess essentially all birds and dinosaurs are some form of chicken.
Even though the new skeletons are supposed to be made of fabricated/reformed bone, I still prefer a more grungy look. Can't wait till I have a full 1000+ points painted. So far it's been pretty fun painting with contrast paints but I'm slightly concerned about how well it'll work on larger models like the artillery piece and the terrain piece. Also after the last community post I'm too intimidated to paint Katakros.
Top

My personal instinct would be to avoid using Contrast on anything with large flat surfaces, BUT on the other hand Osaka painting wunderkind Senasuke figured out a quick way to get rid of (most of) the pooling you can get (video here, and her channel is in general a pro follow) - the gist of it is if you mix regular white paint and the contrast color you used and sort of drybrush over the uneven bits with that, then reapply a thin coat of the contrast color, it takes care of the worst of the pooling.

I think Katakros would be a fun project - the trouble with "painting with the pros" articles like that is that they can be about 50% inspiring and 50% terrifying. Focus on the first bit, heh.
Feel free to call me Dave!
-----
Miniatures painted in 2020:
AoS-iverse: 87 infantry
40K-iverse: 39 infantry, 1 monster, a whole mess of terrain
Adeptus Titanicus: 1 Titan
Top
Post Reply
9326 posts