I had a fun game last night. On my opponent's side of the table, a Blue Mill deck full of the standards for that theme: Walls, Merfolk, Run Away Together and the like. On my side of the table, a Red Chandra deck with Chandra, Awakened Inferno and Leyline of Combustion on the table. Now, most opponents would probably have thrown in the towel when the Leyline dropped, but not this guy. If anything, he decided to try to mill me harder.

much respec' for those who never give up. Even if they probably really should

Personally, I've been getting a bit fed up with Oko in both Brawl and Standard. Turn 2 Oko is just...meh. Dull from then on in. Even with a deck built specifically to combat him, it's still a bloody difficult uphill struggle. It's not impossible, mind, but it depends a lot on whether or not he comes down turn 2 or 3, and what else the deck has. The usual netdeck (goose, once upon a time, ugin, etc) is like a brick wall, though. Ho hum. At least I can comfort myself with the knowledge that my esper shenanigans is no longer the filthiest playstyle in the game...

and since I did my best and kept going, here's how the game finished. He played all those creatures in one turn, after I wiped the last lot, and the lot before that

If you have any bright ideas about how to deal with Oko, answers on a post card, please... 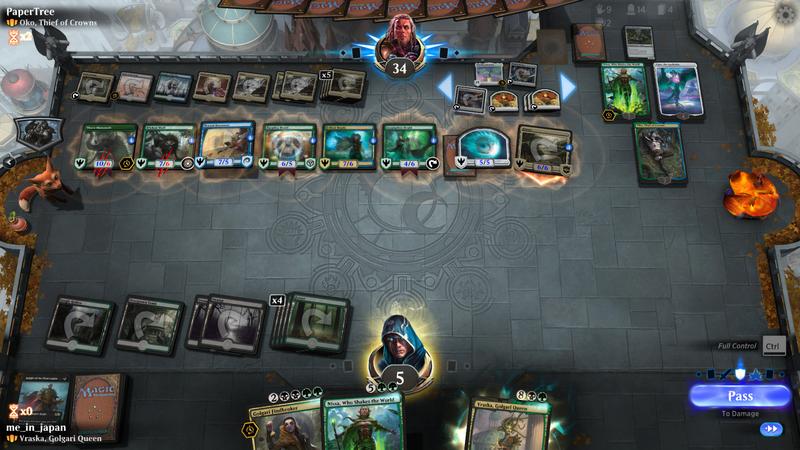 I had some free time yesterday, so I put a new deck together. It's manabase is primarily Blue with a dash of Black for removal, but the aim of the deck is to drop a pile of artifacts onto the table followed by Tezzeret, Master of the Bridge. Despite ol' Tezzie being a mythic rare promo card, I had almost never seen him played, and his abilities looked ok. So, a few wildcards later I had a new deck that went 10-6 against a mix of different decks. I got rolled by an Oko/Teferi/Hydroid Krasis combo and a Gates deck, but held my own against pretty much everything I faced. (Which were primarily mid-range decks).
Animating Faerie is fun! Over the course of last night's games I bludgeoned opponents to death with: A piece of food, a locket, a wishing well and a clock tower.

And the highlight of last night's games, I beat down a RG Adventures deck with only 2 mana for the entire game. It was very, very close, but Gingerbrute and a Steel Overseer is brutal.

That deck looks pretty fun, actually. I kinda want to try it, but I'm short 3 Tezzerets and 2 Overseers, which is sliiiightly more than I can afford right now. I've been playing around a bit with an Azorius control deck I found, and it seems to be doing the business for me. But, it's super slow, with a win con of "make 1/1 tokens until the opponent dies of boredom" so I changed it a bit to have a few cards that actually, yknow, win games.

I tried a couple drafts yesterday, and daaaaamn I am getting sick of mill decks. One guy had 5 milling merfolk, plus the prerequisite bounce spells and So Tinys.

It's time eldraine went away, frankly.

On the plus side, I pulled a Royal Scions in my last draft (and still couldnt win) but hey! Who knew Will and Rowan were Scottish!?!

*edit* ahahahah! Oko got banned in Brawl. Because of course he did

Now, if they could follow through with Standard, too, that'd be lovely, thanks

I had a play around with my collection and put a mono-Black deck together.
Deck
2 Bladebrand (RNA) 64
1 Gutterbones (RNA) 76
4 Ill-Gotten Inheritance (RNA) 77
4 Banehound (WAR) 77
2 Ob Nixilis, the Hate-Twisted (WAR) 100
4 Bloodthirsty Aerialist (M20) 91
4 Dread Presence (M20) 96
2 Knight of the Ebon Legion (M20) 105
2 Legion's End (M20) 106
22 Swamp (ANA) 63
2 Foulmire Knight (ELD) 90
3 Ayara, First of Locthwain (ELD) 75
1 Epic Downfall (ELD) 85
1 Foreboding Fruit (ELD) 88
4 Revenge of Ravens (ELD) 104
2 Castle Locthwain (ELD) 241
If I can build up some board presence, it can be quite a defensive deck to play as it doesn't require me to attack to actually win. (Though it can easily pump up some pretty big Bloodthirsty Aerialists). Revenge of Ravens is a fun card to have on the table and is awesome in multiples. I managed to get three out against an opponent playing a weenie horde the other night. I guess he was unfamiliar with the card as he carefully built up his horde, eliminated my blockers, attacked me with a wave of creatures and promptly lost the game.

Jank is indeed fun. I don’t really have any jank decks right now, but I’m kinda heading towards building some. I still actually quite enjoy my Azorius control. Because of the matching algorithm I seem to get paired against control decks more often than not, which makes for some pretty tense games.

Have you tried Oko’s madness? Because srsly, if you’re not that fussed about alt art then do yourself a favour and don’t. Easily my most disliked game mode. I tried it last night and you’re basically paying 2500gold for the privilege of spending the next twenty minutes randomly winning or losing with no agency whatsoever. It goes thus:
T1: land, random creature. If said creature either generates tokens when it ETBs, flies, or can cause at least 3 direct damage each upkeep, you win. If it stays tapped or is otherwise below par, you lose, and if it’s a vanilla 3/3, continue to turn 2.
T2 and onwards: repeat turn 1 until someone whiffs or gets a random wincon.

Like getting my eyeballs slowly sucked out of my skull. Just...grim.
current (2019) hobby interests
minis
Nurgle daemons for AoS, Ghosties for Shadespire
Magic cards
tribal zombies, Standard, too much MtGA.
Hobby finances
minis: in the black
MtG: So, so red

I do rather like Wizards' "state of the game" updates. It's good to have some idea as to what they're thinking and where things might be headed.

So far, my thoughts are:

Historic cards: mostly ho hum, but there are a few in there (Goblin Matron, Cryptbreaker, Imperious Perfect, Phyrexian Arena) that make me raise an eyebrow and actually consider the format. Plus, I've started to miss some of the rotated cards (I was rather fond of a certain Hero of Dominaria by the end of things...) I've also managed to save up over 8000gems, so the get-em-all option is actually quite tempting. I'll need to crunch the numbers a bit and see.

Historic Event - Yeah, I'll probably give this a go, but I'll likely net-deck it. 1000gold is small enough to be basically disregardable, and I'm a sucker for card styles.

The bit about what they intend Arena to be for - an interesting read. I think working towards Pioneer (and saying as much) is just good sense. I dunno how much you watch in the way of podcasts etc, but folks have been baying for this since Pioneer was announced. So, good news here.

Overall, a good update and I'm keen to give Historic a whirl once it's available. My only real concern is how much time it'll draw away from regular Standard play, and ranked progression. I mean, I really enjoy Brawl, but it's one evening a week away from ranked grinding. I dunno if I'd want to take more time away (keeping in mind I dont actually have much time to play anything much anyway, and also have other stuff I want to do like, yknow, sleep, paint, etc.)
current (2019) hobby interests
minis
Nurgle daemons for AoS, Ghosties for Shadespire
Magic cards
tribal zombies, Standard, too much MtGA.
Hobby finances
minis: in the black
MtG: So, so red