I tried a Grixis deck myself the other day, though not built around Death's Shadow. Instead it relied on Nicol Bolas, the Ravager and Nicol Bolas, Dragon God. The deck still needs work, but I won a couple of games with it.
My favourite game so far was against another Grixis deck. We had both been damaging each other a little, but due to a sneaky Ashiok, my opponent was down to 3 cards in his deck and needed a quick win. They managed to steal my Bolas the Ravager, hit me for 4 and then, having nothing else to do, triggered Bolas' ability to change into a planeswalker. I haven't laughed quite that hard in a while.
For reference: ah yes, I am very familiar with ol nicky B. I've had my opponent steal/flip him too. Much hilarity ensued, lemme tell you. (it's the pause-hover over-pause-quit timing that's so good, imho

I've had a lot of mileage out of my BUG zombies in historic, but I kind of feel the time has come to find some other pet deck, for now. The Zs are cool, but the prevalence of control in the meta just now is really hard on them. I've tried putting some Rise of the Dread Marn in the sideboard, but so far I havent had the chance to come back from a board wipe with a bunch of angry draugr. The problem is that the control decks will happily shoot individual zombies like cryptbreaker with a fatal push or similar, long before he gets going tapping Zs for value. So my first few Zs get shot individually, then once you hit turn 3 onwards, their doomskar is loaded and ready, and I have maybe 1 dude on board. Best case scenario I can dreadmarn a single dude back, which isnt really worth the spot in the deck. I did manage to squeak a win with Gary against a big Teferi control deck, and it was by punching him in the face repeatedly for 2 damage a turn until he was dead. Very satisfying, so it was. So I'm resolved to find a new deck to build, and Death's Shadow looks like it might be the one. I tried Grixis at first, and didnt do well, then shifted to Esper, then Mardu (the board wipes and Adanto Vanguard in white are really good for the deck) but eventually I swung back around to Grixis because the deck really, really needs blue for the counterspells (to save the Shadow from getting removed) and red for doublestrike and trample/haste (because the likelihood of a Death's Shadow surviving more than a single turn after hitting the board is verrrrry low, and there's no point if some wee 1/1 is going to get in his way every time he swings.) I'd love for there to be a card in historic that provided some combo of doublestrike, trample and haste, but sadly, there aint. At the moment I'm compromising with a red spell for 1R that gives doublestrike, and footfall crater, which enchants a land for R then allows it to tap to give a creature haste and trample till end of turn. The mana cost is a problem (it takes 3 to get the Shadow tooled up and ready to go) but the real killer is the slots the cards take up in the deck. If I could just trim it down somehow I reckon it might be a goer, but at the mo, I keep finding myself coming up slightly short.

Also, there was one horrible game when I was playing Death's Shadow and my oppo put down Blood Sun, which just shafts my whole deck so hard. I mean, who the heck is playing Blood Sun? What are the odds I come up against the one card that cuts off my access to haste, trample, and self-burn in one card? Needless to say, I lost that game

Still, it's all valuable learning experience, aint it

*edit* interestingly, the card that modern DS decks use is called Temur Battle Rage, which gives it double strike and also trample for 1R at instant speed. What's interesting is that it was first printed in Fate Reforged, but was also reprinted in Double Masters, Commander Legends, and will be again in Time Spiral Remastered. The point being, that's a LOT of recent reprints. Clearly they're aware of its use in DS decks. So why isnt it in Arena? Hmmn? Riddle me that...
current (2019) hobby interests
eh, y'know. Stuff, and things
Top

Mardu is better than Grixis.

That is all. (And borne out by statistical analysis of, ooooh, a couple dozen games, so it must be true. SCIENCE!)

It's still not a strong deck, mind you. I have bugger all idea of what to do against control, and aggro gives it hassle, too. Basically, it's one of those decks that when all the pieces come together its great, but in Historic that means 3 specific cards (Death's Shadow, Footfall Crater and Raking Talons (Claws?), and also having low health AND also having the mana in place. (Screw is a REAL issue with the deck. 12 shocks, 6 MDFC (the mythic ones that burn you) and 3 basics for when you get Ghost Quarter'd don't leave you much room for error. The deck runs really low to the ground, but even so, I've had several games where I had to mull to 5 to get even a single land. Oh, my kingdom for a fetch land (it fixes! It burns! It comes in untapped! It activates Fatal Push! What more could a player ask from a land?)

So yeah. Death's Shadow in Historic is...fun, for sure, but I just don't see how to make it work at the moment. Maybe somebody smarter than me can prod it fast enough to make it go *shrug*.

In other news, it would appear that Liliana finally found gainful employment. She won't last the year, though, DADA teachers never do... 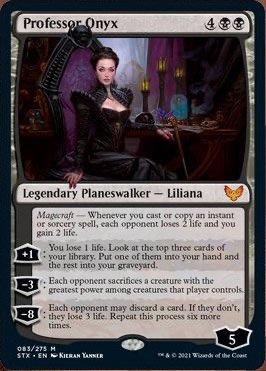 And Kasmina has gone a bit green... 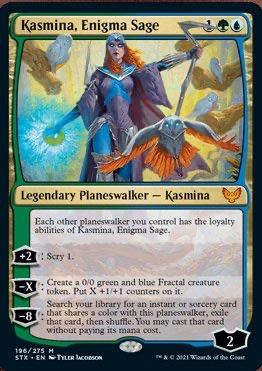 Lilly looks a bit pricey for what she does, especially in Historic where she will be competing with other Lillys for a slot. In a slower format like draft or brawl, I can see her getting good value. Golgari can fill the yard with creatures and search for the instants and sorceries you need to cast them. She might work well in a control shell, but that's not really my area.
Her inbuilt effect is pretty cool though. Grixis build perhaps?

Kasmina? I'm not sure. If you need to put a +2 on a walker she is ok I guess. Not sure what I'd do with her. Her ultimate is good if you you have a payoff for it.