Well, I must say that 5 free levels thing was marvelously timed. Finally managed this with 3 whole days to spare 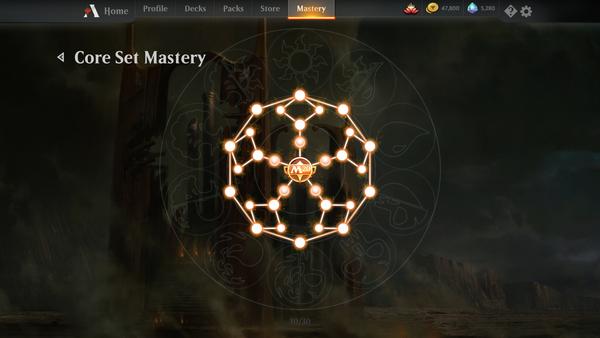 And out of interest, after trying a whole slew of net decks, including the evil cavalcade, I eventually found great success with...a home brew. Whoda thunk? It would appear that I am, when all is said and done, an esper-control playing bastard at heart.

Seriously though, this deck is super satisfying to play. It goes thusly:

nope
nope
nope
a creature? Sure
another two creatures? by all means, be my guest
board wipe
nope
nope
trying creatures again? Deary me
board wipe
Finale of White Weenie at 12 mana
Opponent scoops

And then there was that one time I played Thought Erasure three turns in a row. He scooped after the third (which technically is silly - I mean statistically what are the odds of me doing it again after that lot?)

Anyway, a deck list, if you fancy being That Guy for a bit...

*ps I had never given The Wanderer enough credit, it seems. I kinda dismissed her as a bit of an edge-case card, but dayum, she brings home the bacon against gate decks (completely nullifying Gates Ablaze, and exiling the crap out of pretty much every creature they play), and was highly effective against an RDW deck where I Mass Manipulated their Arclight Phoenix then watched in puzzlement as they repeatedly tried to shoot it with shocks, lava coils and other burn spells, to no avail. I mean, I'd've stopped after one, but not this guy. Turn after turn, like he expected something different to happen...

Congratulations on level 100. I was comfortably on target till my PC crashed. Now Im at level 96 and I have used the code already. I have to complete all my weekly wins, quests and several runs through the Standard event to max out.

Was there ever any doubt? I've heard that WotC are planning an alternative art Thought Erasure card which has a picture of your grinning face on it as you reduce yet another opponent to tears of frustration.

I hit level 100 last night. Then I went back into the Standard event a few times and forfeited my games after the draw. I figure most people still in the event are trying to grab whatever Xp they can, and since losing doesn't cost me anything, it's good to give a little something back to the community.

Also, a tip of the hat for being such a gent and giving randoms some free wins. Such a thing never even occurred to me. But then again, I am a filthy esper player, so I suppose it fits the profile

You look well set up for Eldraine dropping. I’m on about 50k gold and 5k gems, but I want to save 3400 gems for the mastery pass, probably. I’ll see.

Also, did you get one of these? This is...a few more games than I’d’ve guessed... 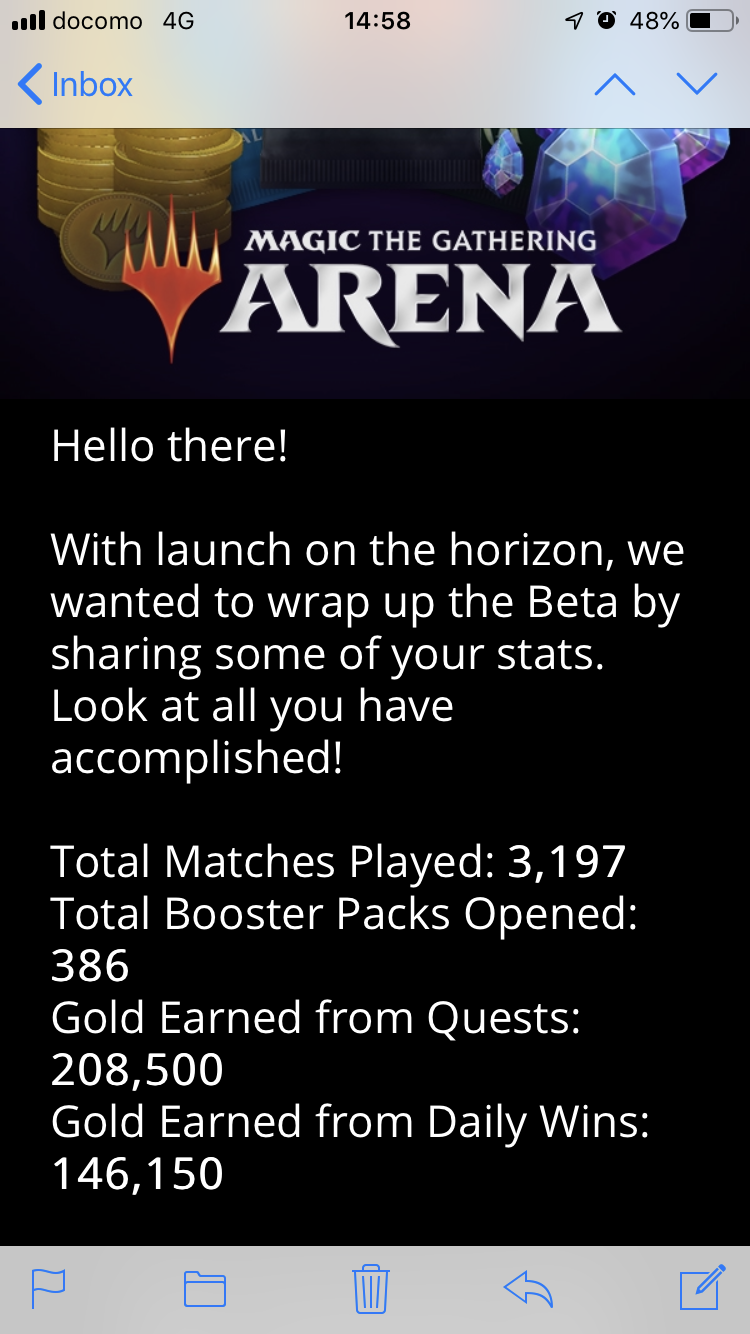 No, I didn't. I think there is a setting for receiving promotional emails from Arena and mine is set to 'off'. My own results will be nowhere near that level as I only started in June this year.
Still, I guess I should really enable it, what's one more occasional spam mail these days?

Hopefully the new meta is a varied and fun one for everyone. I'll be glad to see the back of some cards and will no doubt miss others. With the new set in rotation we should see some new decks for the next few weeks. New tools to use, new combos to try, a whole swathe of new cards to have Thought Erasured and Counter Spelled.


*Or much wailing and gnashing of teeth on the various reddit/forum pages. Actually, I'm kind of expecting it to be honest.

It's probably worth setting your email to receive from Wizards, as elsewhere in that email they said theyd be sending a unique one-use code for a Fblthp avatar and sleeves at some point in the next few days.

and yup. everything will be "broken". Ev-er-y-thing...

I'm calling it now. This update is BROKEN! It doesn't update until midnight our time!!

To make things worse, I have a work party tomorrow and will probably be in no state to play afterwards.

The mastery pass shuts off at 8pm, but you can’t start the next one till midnight?!? That’s FOUR FREAKING HOURS with no magic! What the hell is a guy to do!?!?!11one!1bikkurimArk!!!
current (2019) hobby interests
eh, y'know. Stuff, and things
Top

So, how are you finding Eldraine so far?
I went 5-3 in a Sealed game with a GB deck. A lot of the new cards seem to encourage mono-colour builds due to the new keyword 'adamant. I quite like the new Adventure mechanic too. Cards seem much more flexible and give you a load more options in your opening hand.
I have run into Oko once so far and he is a card that you will absolutely need an answer for straight away. He can defend himself from creatures very well and can quickly run away with a game if left unchecked.
Painted Minis in 2014: 510, in 2015: 300,
in 2016 :369, in 2019: 417.
Top

Eldraine is definitely taking some getting used to. I've stuck with my usual Esper nonsense, and so far it's served me reeeeasonably well. By which I mean about a 50% win rate

I managed 6 out of 12 on the all-cards-available event (and in my defence, I actually only used cards I owned. No freebies for me.

One thing that has become abundantly clear to me is that you need graveyard hate in Eldraine. That cat/oven combo where the cat is repeatedly reincarnated by eating a pie made of its own dead self is horrific to deal with if you don't have some kind of way to stop them recursing from the graveyard. (actually, put like that, it's just plain horrific. Who the hell thought that one up?) So, I now run two leyline of the void in my main deck. That said, once I made that change to my deck, I've had a much better time of things. I had a game this evening against the currently popular esper control deck that uses Dance of the Manse and a whole bunch of artifacts/enchantments. They had maybe 3 artifacts and 2 enchantments in play, and looked to be shaping up for a game-ending Dance, but I managed to get a wishclaw talisman down, followed by Teferi. Tap the talisman, tutor for a leyline of the void, use Tef to return the talisman to my hand, then cast the leyline. After a few turns of doing pretty much bugger all, they got a bit frustrated and eventually Planar Cleansing'd the whole board, and everything they had down went straight into exile. When I top-decked another leyline the next turn, I couldn't help but hear a Jabba the Hutt chortle in my head as I popped it onto the board. Highly satisfactory

I haven't tried sealed yet, or encountered Oko. So far I'd say the most trouble I've had has been Cat Pie and the aforementioned Esper Dance deck. I'm feeling fairly satisfied so far, though. Although, control can sometimes suffer from just not drawing the right cards - the last game I played was against sorin/vampires, and I drew 3 lands the whole game, none of which were blue. Better now than in next weekend's event, I suppose. *shrug*

I may try a sealed tomorrow - I have just enough gems to do so, and am quite keen to give 'er a whirl. I'll let you know how I get on