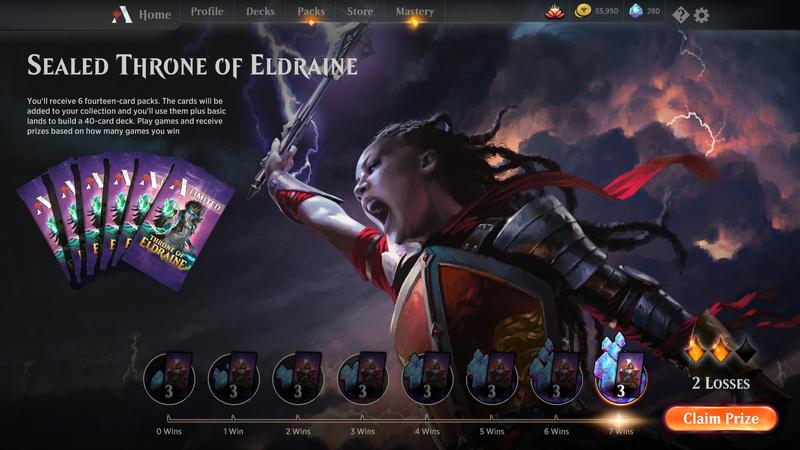 I've only ever done that once before. To be fair, my 6 rare cards were...eyebrow raising. (specifically, Brazen Borrower, Emry Lurker of the Loch, Castle Vantress, Lochmere Serpent, and two other cards I didn't concern myself with because hot damn that's a lot of blue!) I built a Dimir deck which was a bit short on creatures but had enough shenanigans in it that I could repeatedly (and probably annoyingly) bounce their stuff back to their hand, bounce my stuff back to my hand, and recast it from the graveyard/hand as necessary.) Also, Emry and Witching Well is a really effective and low cost combo (tap Emry, cast Well from graveyard for B, scry 2, sac Well for 3B, repeat next turn. Fair churns through the deck. Nearly decked myself a couple times, actually, but sooner or later you're going to pull the Lochmere beastie, and then it's pretty much gg.)

Quite pleased with myself

So, apparently this is a thing.

Honestly, I’m tempted to get the Twilight Sparkle sleeves for arena just to troll the legions of people who are spitting the dummy due to MLP being...I dunno, not cool enough for magic?

hmmn. well. That was balls. (the win-every-card event.)

I went in with my hitherto 60% win ratio esper control, and promptly came up against a weird golos/gates variant full of odd things it doesnt usually have (and moreover got mana screwed something awful - by the end he had 16 land, and I had...5.) Held him off for a good long while (as evidenced by the land total) but eventually died when he went from an empty board to swinging for lethal on the same turn (by means of lots of FotD zombies and Kenrith, a card I've never seen before, at least not in actual play.)

Second game, it was (again) a deck I've never come up against before involving black/red knights? Again, got hosed on the mana and just had nothing that could achieve anything against him.

with an Azorius deck. The first game I was mana-flooded, drawing 8 lands to 4 spells while my opponent beat me down. The second game was against a pure black deck and I landed a few Deputy of Detention cards to shut down their deck while my Hero of Precinct One spammed soldiers to chump block everything else and my flyers went overhead to win the game. Game 3 was a new deck using Fires of Invention to play planeswalkers (notably Bolas, Chandra and Lilliana) for free.
Painted Minis in 2014: 510, in 2015: 300,
in 2016 :369, in 2019: 417.
Top

I suppose the lesson is: don't go into a game/event with expectations. Cos RNGeesus will getcha every time...

Ah well, onwards and upwards. My 4 brawl decks that I ordered should arrive today. Got em for 7000en for the lot, and I see them being flogged on facebook for 140USD. Always nice to know you got a bargain

Ah well, onwards and upwards. My 4 brawl decks that I ordered should arrive today. Got em for 7000en for the lot, and I see them being flogged on facebook for 140USD. Always nice to know you got a bargain

They’re actually not a limited run, and will be reprinted as they are fairly soon. Wizards stopped doing rrp recently, which allows sellers to set regional prices. I just happened to find a very reasonably priced Japanese seller. They’re especially popular in the states/Europe because they have shocklands and arcane signet, both of which are very desirable in Commander (the signet alone goes for 20usd, and is in every one of the four decks.)

So, it’s not that they’ve doubled in price so much as I got them cheap.
current (2019) hobby interests
eh, y'know. Stuff, and things
Top