It was a discard deck that didn't have Thought Erasure in it! It was sick and in need of some Blue, stat! Woulda been a crime to leave it otherwise...

You're simply biased in favour of Blue in my opinion. Black has loads of good discard options. Duress, Drill Bit & Vicious Rumours to name but a few. You just wanted a reason to include those horrid UB cards like Thief of Sanity and Hostage Taker, didn't you?

TL;DR
Pros
More ways to earn Xp in September
Bonus cards after rotation if you log in before rotation
Ranked games in the new Historic format after rotation
20 'new' cards from older sets released into Historic every quarter
Historic draft from time to time

Cons
No 'new' full sets in Historic for now
Rotating sets will only be available to buy in 45 pack bundles (from Sept 26th)
Rotating cards will be craftable at a 2 wildcard:1 card ratio (from Nov)

Those last two seem to have upset people a little.
So if you are sitting on a bundle of wildcards and you want to get a full playset of something you don't already have, best get it now. (Or wait till WotC backtrack due to consumer pressure

hmmn. lots to digest there.

good:
historic seems to be well thought out. I may not agree with em on all points, but they're at least viewing it as the game maker/breaker that it is.
free stuff is good
Oooh! That event where you get 200XP for 2 wins! As many times as you like! I foresee some late nights scrabbling for XP in my future...

bad:
two-for-one redemption. Why? Surely that's only going to annoy people for no discernable benefit. And it'll only get worse as time goes on and more sets go into Historic.
45 packs only for buying packs. This pisses all over ftp players, because we dont have gems. I appreciate that Wizards want to make money, but basically sealing off an entire format behind a paywall is shitty behaviour. this wont actually affect me (or you) as we have been playing since the start, but for any new player in a few years time who wants to get a bunch of older cards, it'll be cash or go home. That sucks.

interesting: 20ish cards go into historic at a time. Hmmn. I can see why they did this. Theyre going to draw some serious hate regardless of which cards they choose, though...

Overall: I may actually pick up some of the more useful rares/uncommons from the rotating sets. I'll sit on it for a bit, but it seems sensible at this point.

Re tonight - Humblest apologies, but I have been requested to watch the last ep of stranger things (which is a long one - 1hr17mins), so I may be a good deal later. Will you be online later? If you're cool with starting after 11 or so I'm keen, but I realise that may be a bit late, depending on your habits. If anything changes, I'll PM you. (or, yknow, LINE? *hopefully*)

I probably won't be online that late I'm afraid.
I still haven't installed Line, sorry. A short email to my phone is best if you want a quick response, otherwise a PM here is most likely to get my attention.

...And I've only been playing since June. My collection of rotating sets is pitiful.

Over the weekend I did about 5 drafts of Guilds of Ravnica. Out of 17 games (I got 2 wins total

. I managed to go 6-3 in my last WAR draft, but GRN seems trickier), I played 2 RW decks, 2 UR decks, 1 BG deck and 12 UB decks. It was kind of boring and frustrating tbh. Whats worse is that I'd like to do more GRN drafts in the future to progress my collection faster and I know it's going to be more of the same.

Well, I'm still offline, so nothing else to do except browse the Throne of Eldraine spoilers.
There seem to be some new mechanics which seem cool. Food tokens look to be fairly common among the set, and there are a lot of artifact/enchanment dependent spells. The thene of the set is... different. A lot of cards seem to be based on nursery rhymes and fables. 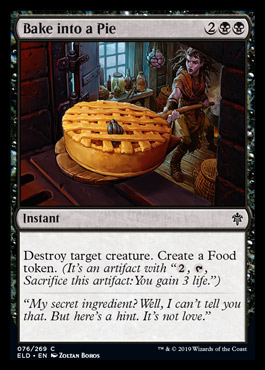 Goldilocks? I love the flavour text on this one. 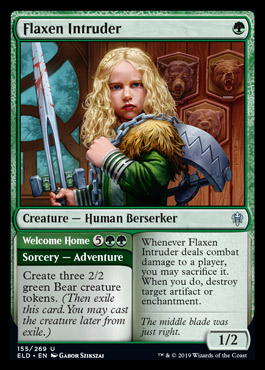 yeah, I'm gonna take a while to get used to the whimsy on this one. Have you seen the trailer?

Of course, the shrek alter cards/memes are already flowing thick and fast. Also, a huge number of people are clamouring for a gingerbread woman planeswalker, presumably just for the shiggles.

I think food tokens are interesting. Also, by and large the artwork is extremely good, especially on the...i dunno what you call em. Premium cards? The ones sold at exorbitant prices in fancy packs irl. Kinda sucks to be normal card art, though.

Also, I tried Brawl* on Arena. It's...ok. I'm kinda struggling with it, but I daresay it'll grow on me. And of course, more variety is a Good Thing.

*and full marks for the person who named this card 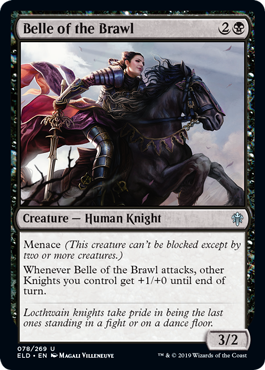 Obviously I haven't played Brawl yet, nor any Arena since my PC went pop. Is Brawl meant to be a version of EDH?

personally I dont like the whole idea of putting special stuff in special packs for (presumably) special people to buy. By all means stick in one random super shiny card in 1 in 100 packs or something, but making expensive packs with special art is just a money grab and gets a harrumph from me. How that'll translate to Arena I dunno. We'll probably see the special art turning up as event prizes or something.

Brawl, btw, is a new(ish) format that Wizards are really pushing. Commander (you may already know?) is not actually designed/run by Wizards. It was made up by a group of players, and that group are still the EDH committee who set the banlist and maintain the rules website. Wizards just decided to support it by releasing dedicated decks/cards for it because they (presumably) saw gold in them thar hills. Brawl, otoh, is Wizards attempt to drag the format kicking and screaming under their control. Until this last batch of decks was (will be) released, it was mostly treated with derision by the gaming community, but these new decks actually have some pretty spicy cards in them (which, ironically, most people seem to want to use in their commander decks

The key differences are:

Commander is multiplayer, Brawl is 1 v 1
Commander is all the cards ever (banlist notwithstanding), Brawl is Standard legal only (thus is a rotating format, which is what has drawn the bulk of the ire of the gaming community)
Commander starts with 40health, Brawl is 25

Other than that, it's largely the same. You have a singleton deck, and a commander who sits in the command zone to be cast whenever appropriate, and returned to whenever they get killed/exiled.

I've actually went and preordered the set of 4 Brawl decks, for a number of reasons (one of which is it was 7000en for all 4 and the go for waaaay more than that elsewhere. Bloody good deal, that was.) After playing the event on Arena a bit more, I reckon I'll come around. I think my main gripe with it right now is I dont know the cards/decks very well. Once it gets a full release and we get to build our own decks, I can see myself enjoying it more. We should try a game of it some time, either irl or online