I think everyone in attendance would agree that this year's NagoyaHammer was a fantastic event, so it is only right and proper that ToD receives the respect and adoration which he is due.

So thank you ToD for stepping up to shoulder the burden of organizing and running everything while I was unavoidably 'volunteering' for community work. I had a great time playing and running games with everyone, meeting new players and getting re-acquainted with old friends. Thank you for allowing me to break out my little vanity project, for giving me a shot at Warhammer Shadespire Underworlds: The Nightvaultening, and thank you for setting up three fun missions (and a beautiful flow-chart) for the main 40K event.

I'd also like to offer thanks to Kojibear for helping out with the financial side of things. Without your economic excellence, we wouldn't have had such an awesome event.

And in the spirit of positive feelings, thanks to Auxryn, Job, Koji and M_i_J for indulging my obsession with the Anglo-Zulu War, to Koji, ToD and Underdweller for the game of Shadespire, and to Miguelsan, ToD (that guy gets everywhere) and Karantu for the games of 40K.

Thanks to everyone for the banter, chatting and putting up with my constant griping about 8th Ed.

Finally, I'd like to say Good Luck to Jus who will be leaving us soon to move to Tokyo. You're always welcome on the forums and we hope to see you at a gaming event sometime in the future!

I will have to second the feelings, even if they come from an evil overlord that met a well deserved end at the muzzle of a meltagun!

Thanks everybody for yet another fun day of gaming!

Great time guys. And thanks TOD for putting together the scenarios, complete with flowcharts

. "Wow, Dave thinks of everything." Had some truly cinematic moments. Lucky-Grot survives 2 burst cannon wounding hits. Ork Warlord punches "Armitager"? giant Ad-mech robot inna face and drops it. Dune-crawler perched spider, it's dreaded Neutron Laser "Mu-hahaha!" lighting up the smokey sky like lightning, and Zulus doin' that Zulu that You Do. And of course Slimex is a tactical genius. 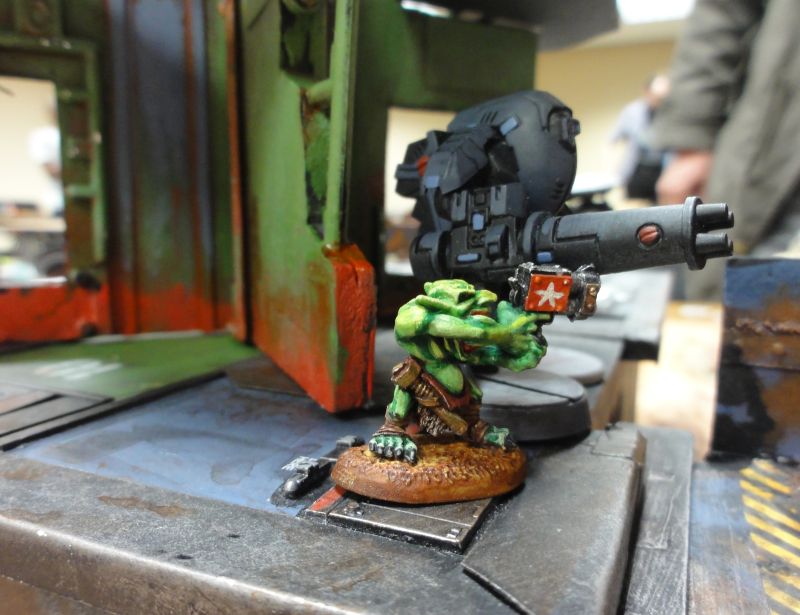 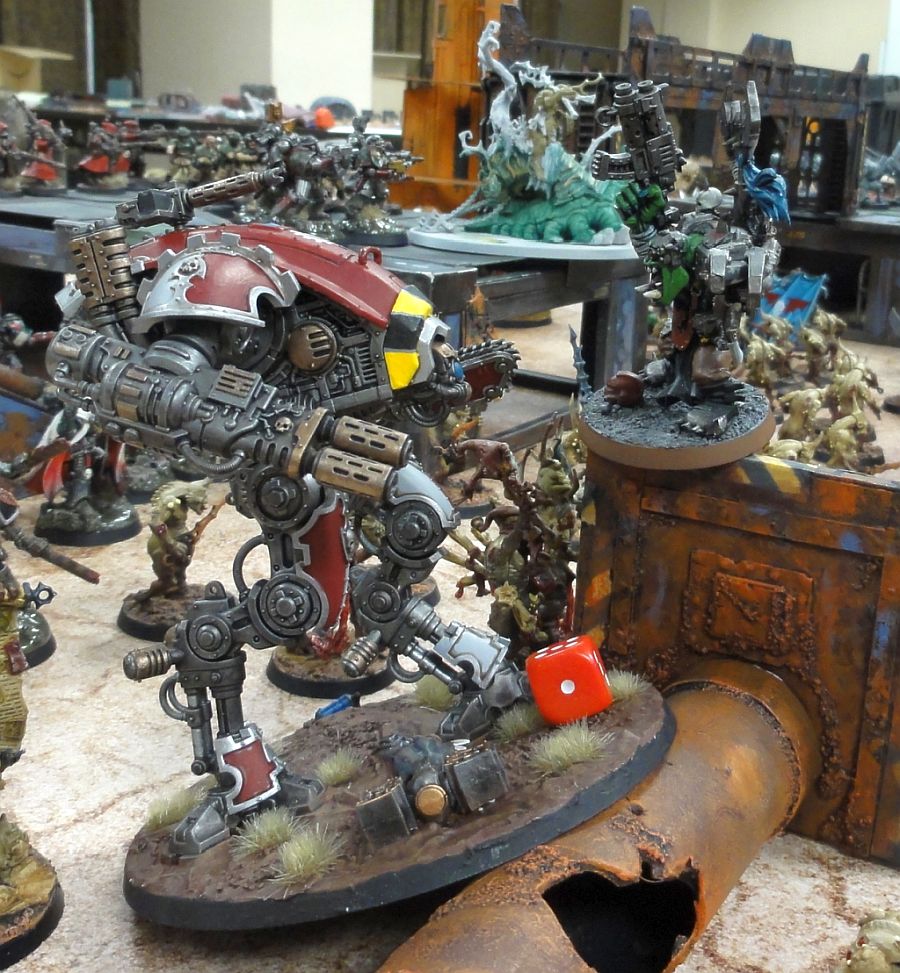 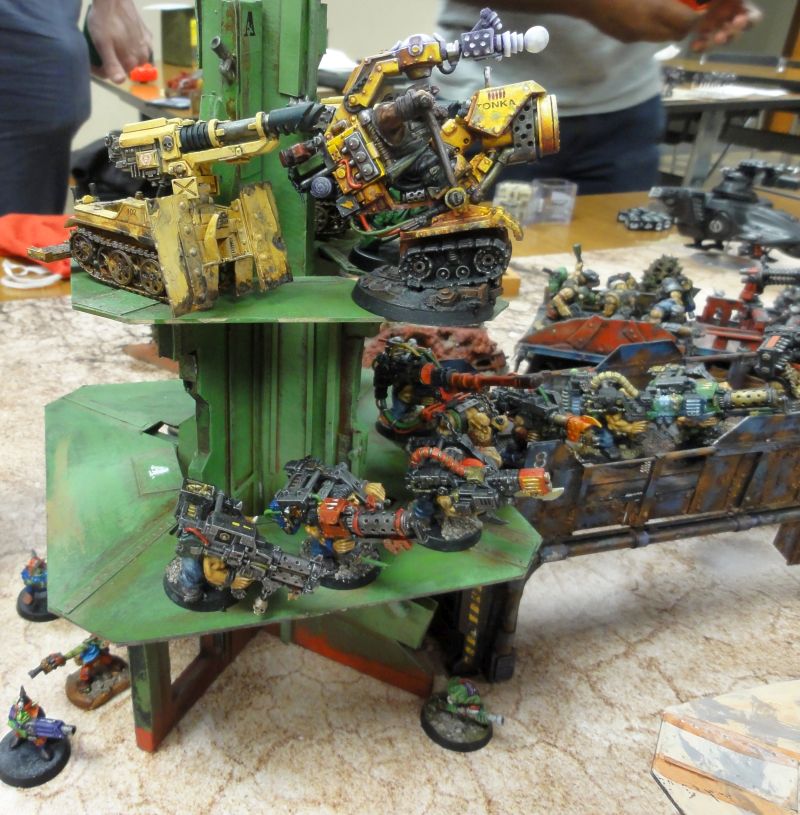 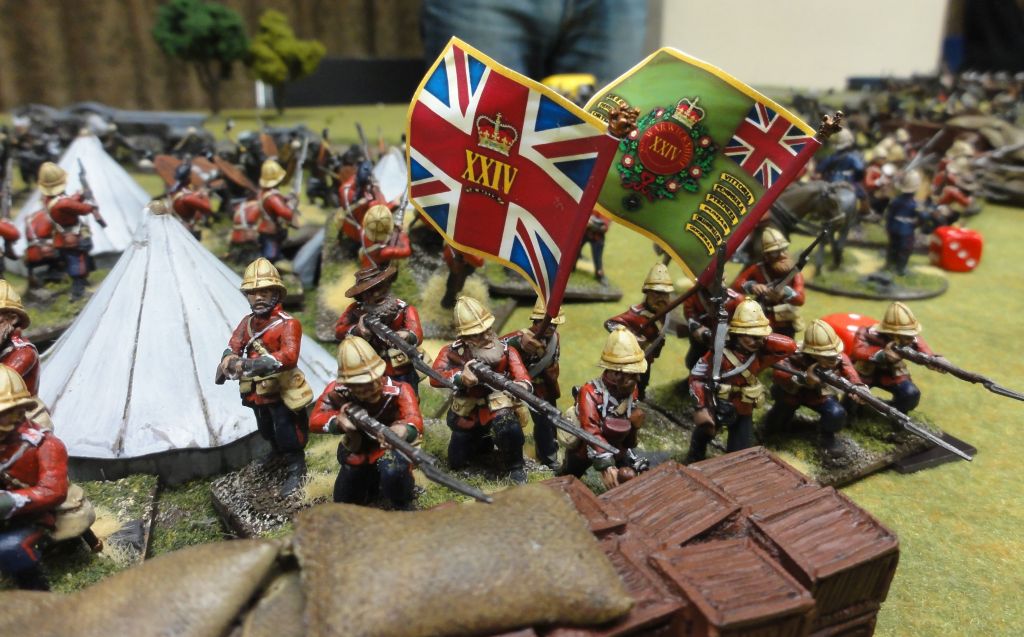 Aww, thanks! All I can say is that it was actually a pretty painless thing to run (aside from the half hour I spent making the flowchart - friggin' Microsoft Word doesn't make it easy sometimes, I tell you what), thanks to the awesome people in our little group. Everyone really came through on the terrain support front (we ended up having rather more than we actually needed), and brought great attitudes to the table. I was glad in particular to get some games in with Prim, who I don't nearly often enough, and I hope you enjoyed them. ("Your Helverin autocannons do 3 damage? That's so broken! Now excuse me while I roll 20 attack dice with my Immortals, and 5's and 6's proc three hits each, and 6's explode into more attack dice, giving me... 40 hits."

Here's my off-the-cuff as-the-organizer thoughts on the whole thing, pros and cons:

Good things!
* The free play day was a success all around, I think - nothing much to say about it. Prim came through and put together what looked to be a really fun game of Black Powder, and while my kill team campaign didn't end up being a campaign in any meaningful sense (see comments below) we had fun playing some kill team, so that was all right.
* The 40K day was nothing but a success, I think. I think making the games 1000 points was probably the right choice (I was, tbqh, surprised we still had some games that didn't finish in the time allotted, but what are you going to do?), and the scenarios seemed to be a hit.
* It was really good to see some new people, and some people we don't see often.
* I was glad to get some Shadespire in, and hopefully some people will think seriously about picking up a warband and giving it a try. Yodobashi Camera in Sakae has English-language warbands in stock generally, for all your impulse purchase needs.

Things I'd like to think about for next year:
* The Kill Team campaign really wasn't, but on the other hand we had fun playing some games so I don't know that it's really a negative per se. We should probably just resign ourselves to the fact that our gaming situation isn't really conducive to any game that involves leveling up over time.

* There's probably not much to be done about it (I did some outreach to the groups I have contact with, to no avail), but I'd really like to get more Japanese hobbyist involvement in the event (and, really, all our gaming events) moving forward.
* If Badruck was active on the forums, I'd apologize for getting into an argument with him over politics over beerhammer, so instead I'll apologize to kojibear and Underdweller for having an argument over politics that you had to listen to.

Thanks for organizing this year ToD. I don't get out to the monthly events as often as I would like so it was nice to catch up with everyone over a couple of longer days of play. I had fun at beerhammer - don't worry, you guys were pretty impassioned but you were still both civil and all.

Thanks to everyone for the games and looking forward to more in the future, hopefully sooner than later!
Top

A big thanks to ToD for his stellar organization - your efforts were appreciated by all!

Thank you to all the terrain providers as I know that it requires lots of preparation and lugging to get it all to the event.

Thanks also to Primarch for allowing myself and three others to go back in time and - as it turned out - recreate quite accurately the ending of the Zulu movie.

I really enjoyed the Shadespire games I played, so thanks to ToD for leading us through and showing us the ropes.

And thanks to my Nurgle and Dark Eldar 40k opponents for two thematic, narrative and well played games of 40k. Unfortunately the Exodite planet has been turned into a garden of nurgle and the survivors kidnapped and taken to Commorragh! lol

And finally thanks for everyone who came along to enjoy the fun and fellowship. Hope to see you all again soon.
Top

Many thanks to everyone involved in this, with particular shout outs to Dave for organising it, Prim for spending 7 years painting hordes of tiny Zulus and Brits, and my opponents in all the games I played. I think this year was a great success, and as well as the usual pleasure of seeing everyone again, I particularly enjoyed the variety of games I was able to play this time around- a big one of Black Powder (my first ever!), a wee one of Kill Team, 2 games of 40k and a 4-way game of Shadespire. Can't fault the variety there, I'd say. Beerhammer was, as always, great fun. I'm firmly of the opinion that if you're not discussing politics with Badruck after a few beers, then you're doing it wrong

Sounds like it was a great event! I do miss seeing everyone for NH!
On the painting table:
Bolt Action Narvik Army
Blood and Valour Gallipoli ANZACs
Fantasy Savage Orks and Empire troops
Warhammer Quest The '95 original!
Top

Thanks to TOD for organizing everything. The missions for game too were all very good. The last mission particularly was interesting and I’m keen to play it again.

Thanks to Primarch for the great Zulu themed game. Nice scenario writing. Nice models and nice result. Don’t bet against Brad’s disciplined volley and bayonet drill and his dice.

Thanks to Konrad for a good Game 1. I have to salute you for enduring one of the luckiest games I’ve enjoyed. I stole initiative. I took 5 5++ saves on my Robots and bounced 3 of the shots into mortal wounds on your characters. I’ve never bounced a shot in any other game, least of all successfully saved on 5++ so often. Thanks

Thanks to Visol for Game 2. It was a very fun back and forth, however, even though it was chalked up as a “tie”, you outplayed me. I doff my non-existent hat to you. (And I’m so jazzed to play Chaos now! Fun chatting up the new dex!)

Thanks to Auxryn for Game 3. It was the closest game I’ve played in a good while. Well played on each round. I enjoy these games most. Thank you. (And you are right about opaque, although opaque glass is what I understand it to be.

Thanks to Primarch for the interesting chat about games, membership at NagHam and a bit of Brixit and Trump over beers. Great to Badruck and great to see all the faces and forum members!