Information for campaigns players wish to run for any game system can be found here.
Post Reply
24 posts

I've got pretty much everything in the list painted up now, so here's a picture dump! 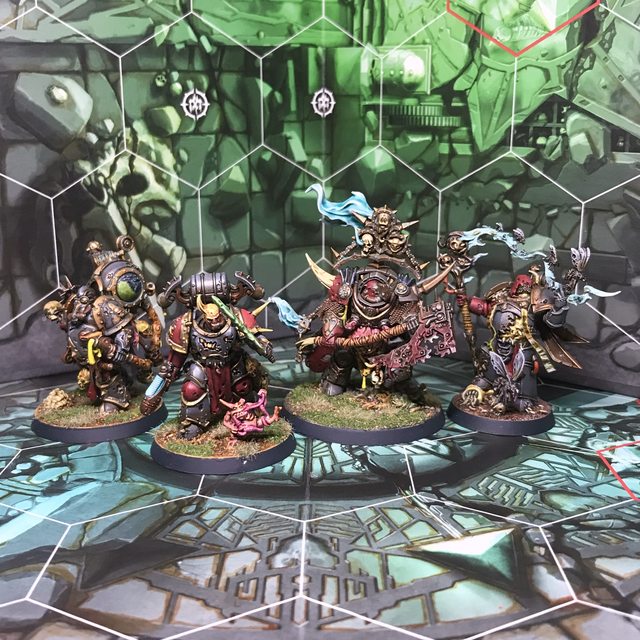 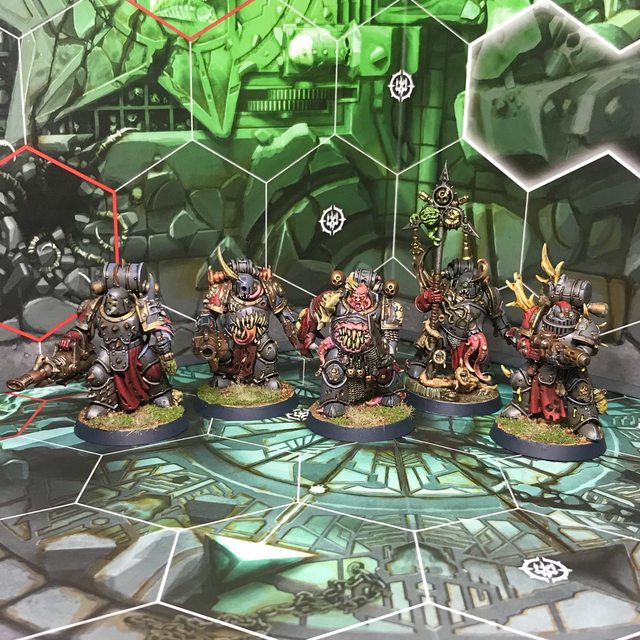 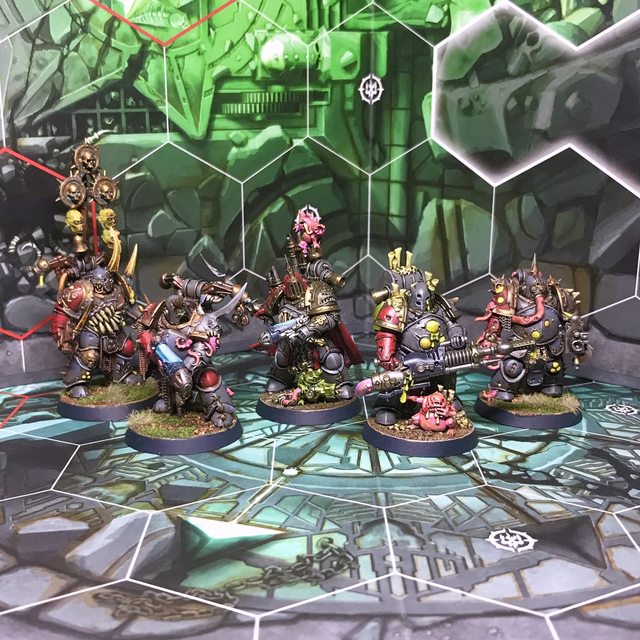 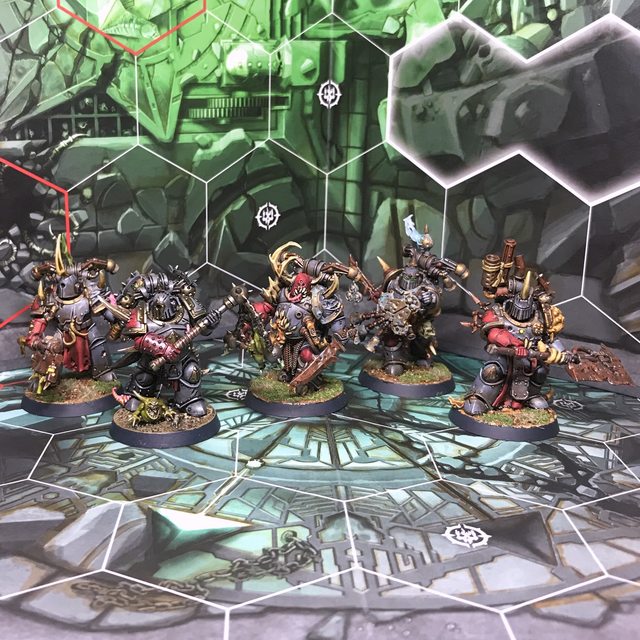 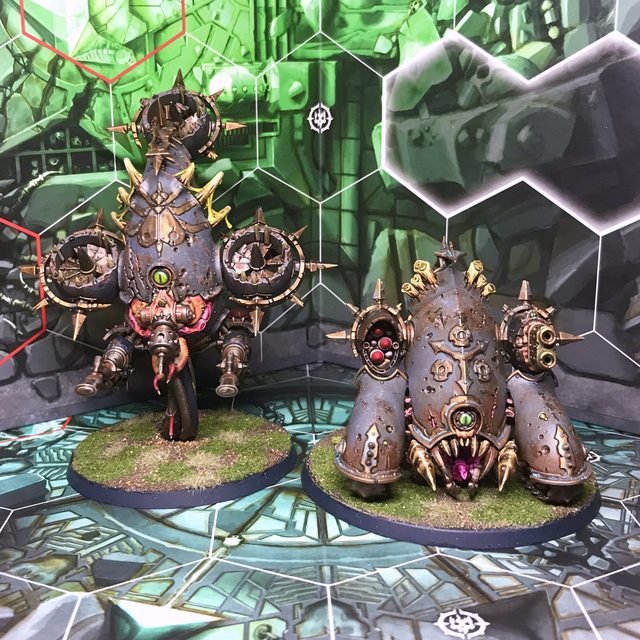 Not a great day out for the Dusk Raiders yesterday! 4 games, tabled in 3 of them.

But I got some cool loot and level-ups, and had fun, so it's a win overall. (Also added some Deathshroud to the roster, so that's my next purchase I guess!

Game 1 was against Jus' Ultramarines, and he used their not-flashy but very-reliable "rapid fire at everything all the time" shenanigans to great effect. Disgustingly Resilient, whether old or new, doesn't stand up well to the good old strategy of throwing lots and lots of dice at it, and that's what the Ultras can bring to bear. Before getting gunned down by Hellblasters (who once again I killed like 3 or 4 but they ended up with 4 models thanks to an Apothecary), though, Gurloch Thrax did kill the Ultramarines warlord, which earned him his second chaos boon, the not-particularly-useful-when-you-attack-at-strength-8 +1 to wound when you charge or intervene one.

Games 2 and 3 were semi-mirror matches against Jye's new Death Guard and Nurgle Daemons, I forget the order we went in but neither game went well.

Against the Demons, Thrax tried to charge a Great Unclean One, whiffed mightily and was slaughtered. (But he did get enough experience to level up and push his luck for his 3rd boon, the this-time-extremely-useful +3 move one.) The other game was against Death Guard, and I don't remember much aside from actually getting kind of close on objectives despite being tabled. In both games, though, the Least Valuable Player was definitely the Blight-Hauler, who must have had nurglings gumming up its works and abjectly failed to do anything useful. First-time-out curse, one hopes, but it makes me really glad I never bothered to field one when their BS was only 4+!

Game 4 was a team game, me and Jye's daemons against Matt's Orks and tallgeese's World Eaters. Big mobs of orks don't like it when you get an empowered Plague Wind off against them... My new Foul Blightspawn also earned his keep, shutting down a charging unit of Warp Talons with induced projectile vomiting, allowing the plague marines they'd engaged to cut them down. (And on two different occasions, the regular plague marines stole my new power armor Lord's kill, wiping out units instead of just softening them up before he even got a chance to fight.) When regular CSM get the +1 wound boost they'll be a completely different can of worms, no doubt.
Feel free to call me Dave!
-----
Miniatures painted in 2021:
Adeptus Titanicus: 16 Knights
40K-iverse: 9 infantry, 1 vehicle
Current backlog: 44 models in 13 lots
Top

Fragments from the journal of Pastus the Impure

So, the Death Guard have made their way to the theater of war. Fools. Usurpers. Toadies to our thrice-cursed gene father, blindly accepting as he sold our souls that were not his to sell in a moment of pure weakness.

But still, they are sold, and we are bound for eternity to the Plague Lord, how he blesses us.

Recently he has blessed us with [scratched out] nurglings driving our daemon engines to distraction. We got them out of the workings, but how the engines screamed... The daemon engines are not trivial to create and maintain with our resources, stretched as thin as they are by Thrax's reliance on so-called "tactics" that boil down to "try to bury his plaguereaper in whichever enemy looks the most important". Mind you, there's no denying that he's good at it, and Nurgle favors him with gifts for his troubles, but he often returns to the Glaive with little enough to show beyond personal glory and armor pitted with plasma fire.

The presence of the genefather's faithful in the sector has made the rituals easier, at least, and while we few remaining true sons of the 14th may be sometimes ambivalent about the pact that was forced upon us, there is no denying that when the Plague Lord's minions join us in battle, it is glorious.

All the same, I have instructed Suppurax to double-check the blight-hauler's track workings and targeting systems for infestations before we deploy next. Again.
Feel free to call me Dave!
-----
Miniatures painted in 2021:
Adeptus Titanicus: 16 Knights
40K-iverse: 9 infantry, 1 vehicle
Current backlog: 44 models in 13 lots
Top
Post Reply
24 posts