me_in_japan wrote:I was idly considering picking it up at U.K. prices (95gbp) and asking my brother to bring it over when he visits in September. Don’t suppose that’d sway your opinion any? Half of 95quid is about 7000en...

Oh, you twisted my arm.

Yay! Bear in mind this won’t appear until September when my bro comes out. It’s also somewhat dependent on him actually agreeing to courier it. He’s a decent chap though. Most of the time...

me_in_japan wrote:Yay! Bear in mind this won’t appear until September when my bro comes out. It’s also somewhat dependent on him actually agreeing to courier it. He’s a decent chap though. Most of the time...

No, that's fine - some very quick looking-up-of-things makes me think I'll want to add it to the contents of a get started set anyway, so there's no hurry.

You've got a bunch of nurgly daemons already, don't you? Looks like you'll probably be ending up with a pretty solid force.
Feel free to call me Dave!
-----
Miniatures painted in 2020:
AoS-iverse: 42 infantry
40K-iverse: a whole mess of terrain
Adeptus Titanicus: 1 Titan
Top

OK, looks like half of Blightwar plus a Stormcast start collecting box will give me a cool 1250 points of big armored dudes with (and this is the key point) a heavy emphasis on dudes riding gryph-chargers. I'm in this!

Also, Kondo-san and I had a quick 1000-point game of AoS at the latest Nagoya games day, and it was fun! Just a small game, so not *too* much room for tactics, but the rules run smoothly and within a half hour we weren't looking at the rules at all, which is always a bonus. Night Goblins were appropriately Night Goblin-y (when the Fanatics hit, they wreck face, but when they don't you're doomed) and a Carnosaur ate half my army, but really it still "felt" fundamentally like Warhammer, lack of movement trays notwithstanding. (I actually thought I'd probably want to use movement trays for the goblins anyway, at least for the "moving 60 little dudes across the board" stage of the game...) It's helpful that the second edition rules are *not* just 4 pages long, so there's some actual depth, or potential for it at any rate.
Feel free to call me Dave!
-----
Miniatures painted in 2020:
AoS-iverse: 42 infantry
40K-iverse: a whole mess of terrain
Adeptus Titanicus: 1 Titan
Top

According to the warscroll builder I'll have 1540 pts of stinkies for AoS once yon box arrives (and, ahaha, gets painted). So yeah - Looks like this little enterprise could be a goer

also, and this is significant, nurgle paints up fast, especially when theyre naked, which they largely are. Might even get this lot painted this year...
current (2019) hobby interests
minis
Nurgle daemons for AoS, Ghosties for Shadespire
Magic cards
tribal zombies, Standard, too much MtGA.
Hobby finances
minis: in the black
MtG: So, so red

As I've said in a PM to t'other Dave, I'm less antagonistic to AoS than I was, from the point of view of trying a new ruleset. I certainly have enough bits and bobs to play, and I fancy painting some stuff that has been languishing in the cupboard. I'm not adverse to giving it a whirl.

I was genuinely open to the idea of something new perhaps from the AoS range, but after trawling through the GW site and giving them a chance to grab me - the minis for the new setting really don't do anything for me at all. The Kharadron Balloon Dorfs do mildly interest, but they are heading into some new territory that isn't what I associate with Warhammer Fantasy. And those prices. Yikes. I thought this was meant to be a more accessible incarnation of the game? slightly...No? plus ça change, plus c'est la même chose innit.

I don't want to be too negative, but go on, I will be. To me, the Stormcast all look blandly identical. The new Nighthaunts similarly seem like someone had one good concept (oooh floaty ghosts!) and thrashed the idea to death in multiple units that look beautiful but so very samey. And impractical..how long before they snap off those bases? The Fyreslayers are all variations on the same appalling idea of a naked ginger dwarf. Orcs are now even more Warcrafty than before, with their Saturday morning cartoon vibe dragon-cabbage mount. I don't like this Castle Greyskull aesthetic. Who are these beings? I have no interest in their struggles or thoughts...

I'm glad I got that out of my system. I might actually give AoS go, but the new aesthetic is very disappointing. I'll be using old stuff for it.
2018 Hobby Progress: A modicum of Middle Earth SBG
Top

Well, de gustibus non est disputandum and all that.

(I will say that, this being GW, "it's going to be cheaper" was never something they put on the table, though.

One of the nice things about it is that there are still rules for everything - for free even. You can get all the Old World unit stats here, and points on the warscroll builder here, which is plenty (along with the likewise-free core rules) to get models on the table - I'm actually surprised, as I look into it, as 40K doesn't give nearly that much free support. The only thing you miss is army-wide special rules, of which there aren't a lot (with the notable exception of armies heavy on summoning) as every unit's warscroll has all the special rules that apply to it right on it.

Heck, even in the month or so I've been looking into the game, I've seen people bringing Bretonnians to tournaments, and doing well with them no less. Lots of room to use your WHFB armies.
Feel free to call me Dave!
-----
Miniatures painted in 2020:
AoS-iverse: 42 infantry
40K-iverse: a whole mess of terrain
Adeptus Titanicus: 1 Titan
Top

that's part of the appeal for me, too. The only faction that makes me sit up and go "ooh" is the witch elves, but the cost of entry just made it a non-starter. But, since I already have a bunch of nurgle daemons for my 40k death guard, I realised I could give 'er a whirl for very little outlay. The deciding factor was when I saw that the Blightwar box set was obtainable for about 12000 en, so once I confirmed I could sell the Sigmarine half to the good ToD, I knew I could get a very playable AoS army for the actually quite reasonable price of 6000en or so.

So aye, if you want to give it a shotty, just rustle up whatever fantasy minis you have kicking around and grab the rules off the net. I'm new to this whole fantasy malarkey myself, so you cant possibly do any worse than I will

I must say that the nurgle garden snail is a great (and very odd) mini, and the rest of the maggotkin stuff, so I can certainly see the appeal. I wouldn’t be able to do it any painting justice I feel, but you have the chops to pull it off.
Might do brayherd, but I’m not completely sure yet...
2018 Hobby Progress: A modicum of Middle Earth SBG
Top

Just spend a couple evenings assembling my Stormcast Vanguards start collecting box - a general and 3 guys on gryph-chargers and 5 bulky crossbow dudes (also some bird-dogs, but only 3 and in AoS2 they're minimum unit size 6, so I'm in no hurry to get to work on them). They're really lovely models once you get past the aesthetic - I think the quality of the sculpts is off the chart, especially for the cavalry. They're kind of insanely complicated builds, though. I guess they're the first thing I've really put together by GW that's in their full-on "let's use everything CAD has to offer" mode that's not also the "and use that power to make the models as easy to assemble as possible" that the easy-build stuff is. 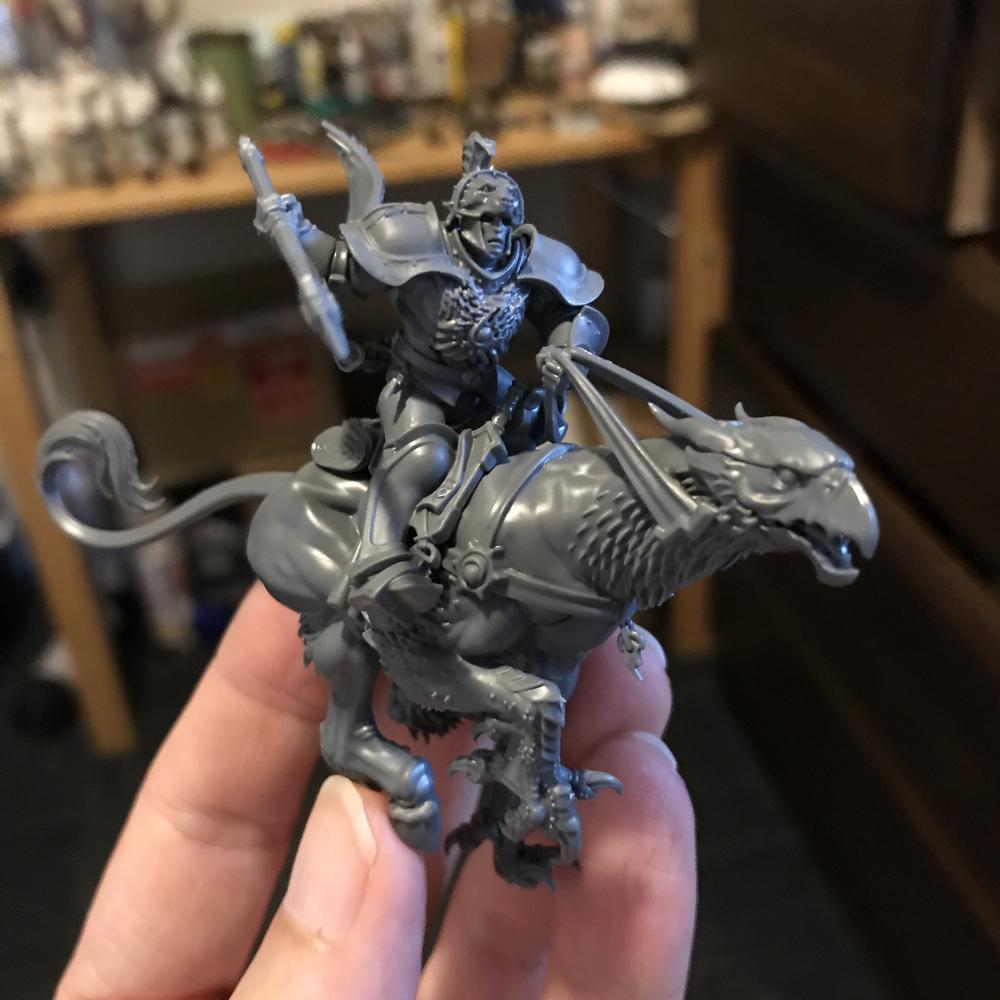 My plan is to not let myself start painting them 'til my AdMech are done (a dozen Skitarii and a mini-knight to go), and the weather is cooperating, in that it doesn't look like it'll be dry enough to prime anything for the next week or so.