The Other Dave wrote:YellowStreak had a cool idea at NagoyaHammer! See, he owns an ASC set as well, so we got to thinking about how we could combine them. The way the game works, having 12 board tiles instead of 6 isn't particularly useful for playing a single battle, but what he figured is that it does allow two battles to be fought simultaneously. So! We could have a big two-flank game, the kind that take all day to play with 2 people because you've got so many battles, and instead have 2 Marine players and 2 Tyranid players, with their exploration and battles going simultaneously. Then you get wrinkles like the players on the same "side" are working both cooperatively (since they have the same goal in the end) and competitively (to see who can achieve that goal quicker / more decisively).

Expect discussions about trying it out soon!

What a cool idea!

OK, here then is for sure (almost certainly anyway) the end of the Marine side of this project: One devastator squad (in the Warhammer 40,000 Compendium style, with the 10-man squad's 4 heavy weapons split evenly between the two combat squads), with missile launcher and heavy bolter, to give me at least one of every squad on the force list. One ML and one HB is the only option they get in the RAW, although I've decided to be nice and allow the option of doubling up if you like. I also painted a couple lascannons, so I can have either an AT or AP squad for 40K (the missile launchers doing double duty), but haven't bothered to allow lascannons in the ASC list, mostly because missile launchers as written have melta missiles, and the extra point of penetration lascannons get is utter overkill against anything you'll meet in the game.

For the Tyranids, I still need some gretchin and some hybrids, then that collection will be complete as well. Who knew I'd go all completionist on this thing? (I probably should have, actually, as it's my usual MO

Having finished up my box of hybrids, I thought I'd get the whole collection out and take some pictures - I've come a long way from the "enough to play" 5 scouts and 10 tactical marines this project started with... 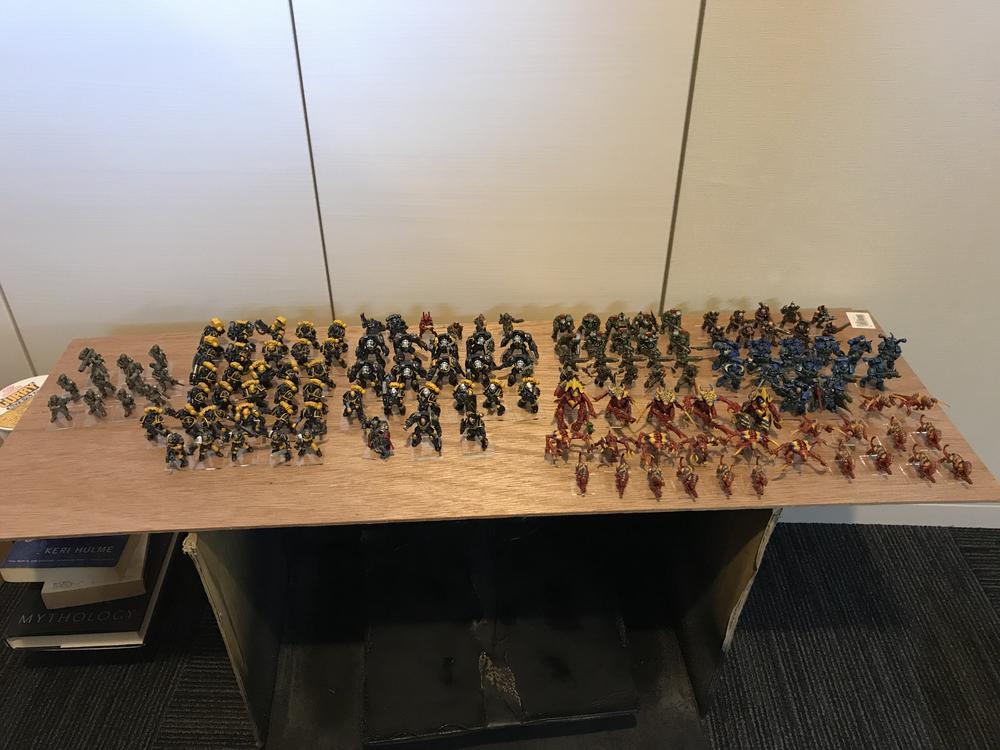 Everything! At least it all fits in my carrying-case-slash-tackle-box when going off to play. 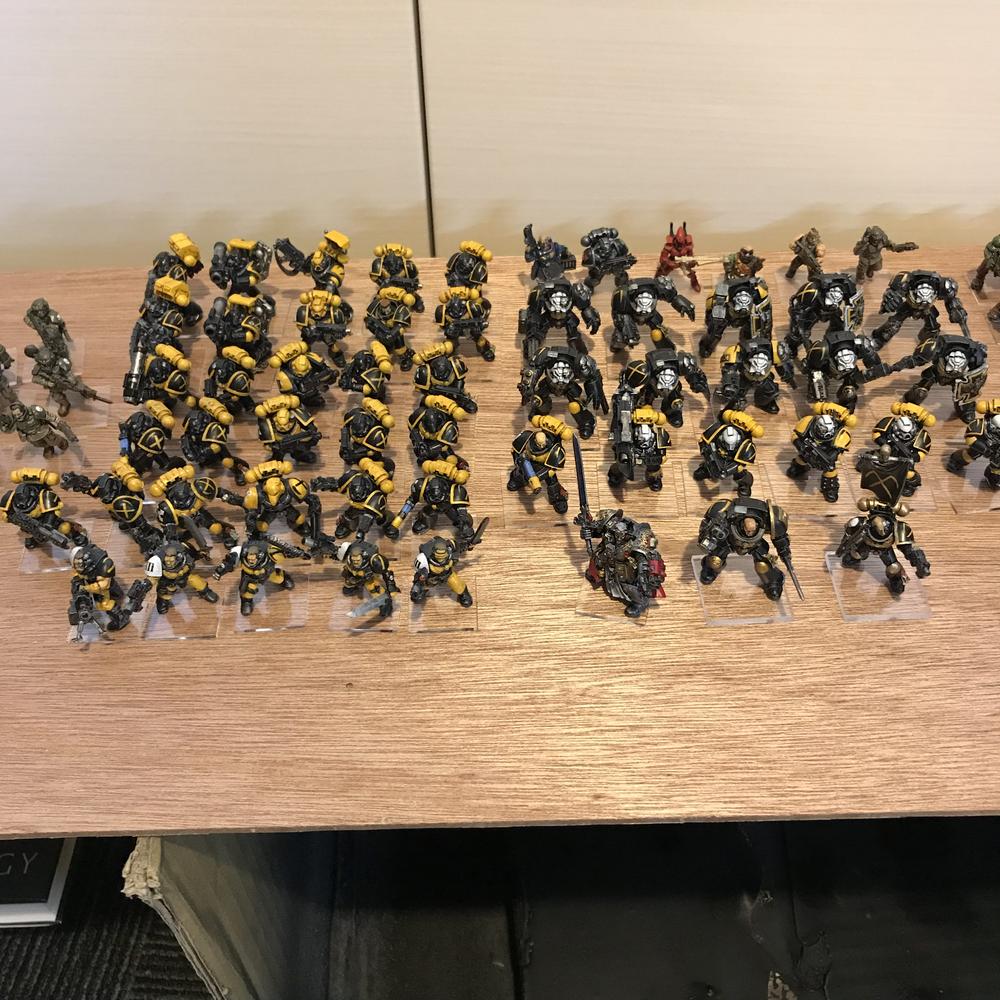 Imperial side, less the guard who wouldn't fit. They don't want to be there anyway, so it's OK. 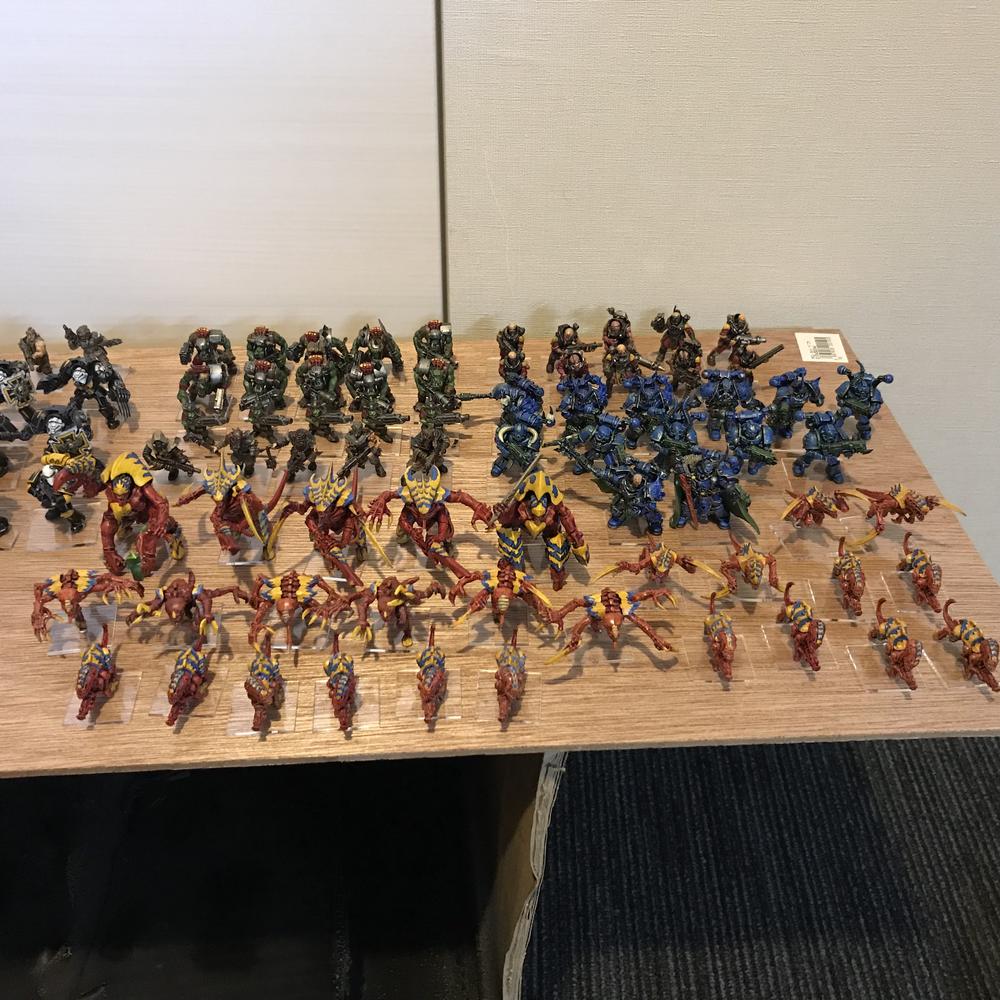 Nid side, showcasing the insidiousness of mind slaves. (Insidious as in "hey, I could fit 5 or 10 of these random guys into Advanced Space Crusade!")

I've said it before, but I can't really think what else I'd buy to expand on this.

That is, unless I wanted to build the Guard out into a playable force...

And I have a load of Cadians I don't need anymore...

Primarch wrote:And I have a load of Cadians I don't need anymore...

I was about to balk at getting miniatures that're already assembled, but I'd need to hack them apart anyway to make the man-portable lascannons that come standard in RT-era Guard squads...

(All the same, I may talk to you some time about a tactical squad and a single guy with a missile launcher.

Primarch wrote:That is an inspiring collection of minis! Even if you don't expand it, you probably have more than enough for any conceivable size of game.

It's actually closer than you'd think, but yeah.

The largest game size, the three-flanks plan-a-weekend-for-it game, would still have to leave a couple Imperial units on the sideboard. (And when you figure that, unless you're doing a team game that I can't do anyway since I just have the one set of game boards, you could use one squad of miniatures across all three flanks, it gets ridiculous.)
Feel free to call me Dave!
-----
Miniatures painted in 2020:
AoS-iverse: 87 infantry
40K-iverse: 39 infantry, 1 monster, a whole mess of terrain
Adeptus Titanicus: 1 Titan
Top

The Other Dave wrote:I just have the one set of game boards

Did I just check for copies of Tyranid Attack! on eBay and notice that a full set without the miniatures only goes for about 5000 yen? I just mighta!
Feel free to call me Dave!
-----
Miniatures painted in 2020:
AoS-iverse: 87 infantry
40K-iverse: 39 infantry, 1 monster, a whole mess of terrain
Adeptus Titanicus: 1 Titan
Top
Post Reply
177 posts