Nice bigmarine, ToD. I must say, I do like the black and yellow. Works very well on the tabletop, too, I'm sure.

On which note - Mortarion and his Death Shroud arrived in the post yesterday. He's a big lad, and no mistake. No idea how to paint him, other than different to the GW version. Too many things going on there, imho...
current (2019) hobby interests
eh, y'know. Stuff, and things
Top

I saw the pics of that game on Facebook. Looked fun! I actually sort of think that one of the charms (if that's the right word) of the Open War cards is the occasional uphill skate scenario, especially if you combine it with the smallish (like 50-60 power) games where 40k 8th is still fun and you can get in a couple games in a sitting - but that does start to get into my personal preferences for 28mm as a more or less skirmishy scale, heh.
Feel free to call me Dave!
-----
Miniatures painted in 2021:
Adeptus Titanicus: 1 Titan, 16 Knights
40K-iverse: 11 infantry, 1 vehicle
AoS-iverse: 19 infantry
Current backlog: 25 models in 6 lots
Top

As I have to do on the Vikings now is to finish flocking the bases. And as I'm waiting till I'm in Osu this Friday to pick up said flock, I finally got a bit of work done on the Diggachicks and even started a brand new secret Diggachick project! Pretty happy with the latest two Diggaz and super excited about the new project. I'll get some pics up once I put some more clothes/strategically placed beads/braids on them. (The Diggaz, not the project. The project has no girly bitz. That's the only hint you get.)
Been mixing this putty called Aves Apoxie Sculpt in with my grey stuff. I really like it. It really helps to lighten up the putty and makes it easier to work with. And my grey stuff is getting a bit old and stiff, so it really helps out. It does really speed up the curing time. Which is good and bad. I work just little bits at a time and set it aside to avoid thumb-smashing my work, so it's not usually a problem. Usually I add standard Milliput, which is good but slows down the curing time. Which is good when I know I have more to do or a more challenging bit that will take more time to get right.
My "just a bit of left-over putty project) is I have some silly, cartoony, mutant-y, freaky guys based on some odd-ball pictures my daughter drew. I need to expand my sculpting repertoire to something besides naked Amazons and dinosaurs after all.
...and now his Head was full of nothing but Inchantments, Quarrels, Battles, Challenges, Wounds, Complaints, Amours, and abundance of Stuff and Impossibilities.....
Cervantes, Don Quixote
Top

Yesterday I painted in the whites on the eyes of some 40 odd figures.

I also applied some decals to a couple of BA minis. I had been going from some Tamiya instruction sheets, but I found that two slightly different sets of instructions disagreed about the correct placement of unit insignia. After looking back through all of the related instruction sheets, I found that Tamiya apparently don't know where unit insignia should be placed, so I wound up searching online for pictures from a museum. Tamiya make nice kits, but at times their research seems a bit hit and miss.
Painted Minis in 2014: 510, in 2015: 300, in 2016 :369, in 2019: 417, in 2020: 450
Top

I’m in Malaysia for work this week, managed to pop into a local gaming store called 'Wira Games'. They stock lots of GW and some flames of war stuff at quite a discount. Very friendly staff and a nice shop with a half dozen gaming tables - wish we had that in Nagoya!
I picked up some Nid bits and had a good chat. 40k and AoS are both very popular in KL.
On the painting table:
Bolt Action Narvik Army
Blood and Valour Gallipoli ANZACs
Fantasy Savage Orks and Empire troops
Warhammer Quest The '95 original!
Top

Bought 3 pots of new paint the other day to paint my chaos demons. Pinks and purples. I need to come away from the Ps4 as I am spending my life on there.

More time needed for books and painting.
Good to see everyone is still keeping their hand in.
Forget about yesterday, don't worry about tomorrow because all that matters is today.

Yesterday I had a pretty productive day. I dotted in the irises on some Saxons and started texturing their bases. I finished assembling a German Truck and some Malifaux minis. Cripes those plastic Mali-figures are a pain to put together. They're pretty good at hiding the joints, but whoever laid out the sprues must have been on something pretty potent at the time.
Painted Minis in 2014: 510, in 2015: 300, in 2016 :369, in 2019: 417, in 2020: 450
Top 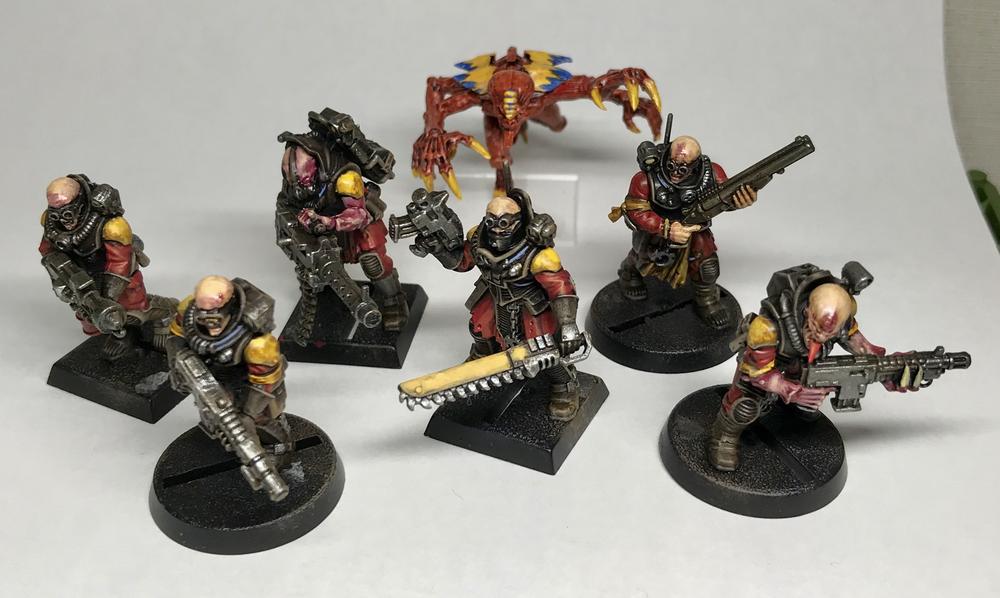 Looking good ToD, will make the same clear bases for them? They're primarily for Advanced Space Crusade, so that's the plan, yes. I'm out at the moment, though, so they'll have to wait to get based up until I get round to placing an order.
Feel free to call me Dave!
-----
Miniatures painted in 2021:
Adeptus Titanicus: 1 Titan, 16 Knights
40K-iverse: 11 infantry, 1 vehicle
AoS-iverse: 19 infantry
Current backlog: 25 models in 6 lots
Top
Post Reply
9812 posts