Dave Has Opinions About MDF Terrain

Dave Has Opinions About MDF Terrain

Over the past year or so, I've been trying to build up my terrain collection - first for Malifaux, then, when I got back into it with a vengeance, 40K - and I've been focusing quite a bit on laser-cut MDF pieces, because it's pretty cheap to buy and easy to transport and there's a massive range of stuff out there to be found. I've sort of ended up getting bits and bobs from a few different makers, because everybody seems to have things they focus on and even the more comprehensive places have gaps. So I thought I'd share some of my hard-won knowledge and ill-formed opinions about the various companies, in case anybody else is looking around at being a Good Gaming Citizen and expanding their own terrain collections.

I should note there's one glaring omission, and that's 4Ground. Their stuff is beautiful, but as it's prepainted it's too rich for my (extremely frugal) blood.

My favorite company, by far, is Sarissa Precision, makers of the semi-famous-in-some-quarters "ToD Pods". They've got a huge and varied range in a variety of scales, extremely good (like, insanely good - 2.50 GBP flat rate worldwide good) shipping rates, and something I've only really realized after putting some other maker's models together is that their name is not just empty ad copy - it really is precision-crafted. Their stuff goes together wonderfully, fits just right, and is generally a joy to deal with. They don't really do "gothic sci-fi," and have a weird dearth of walls, but aside from that if there's something you want in 28mm they probably make it or something like it. Their per-model prices are on the high side, but you more than make up the difference in shipping, and I really can't oversell the quality. Plus they use 2mm instead of the industry-standard 3mm MDF, which may not sound like much but ends up looking a lot less chunky than anyone else (although I don't like the longevity chances of all those guardrails on the hab pods).

I have lots of their habitation pods (from the "system sci-fi" range, which also has a pretty extensive selection of gantries for your Necromunda needs): 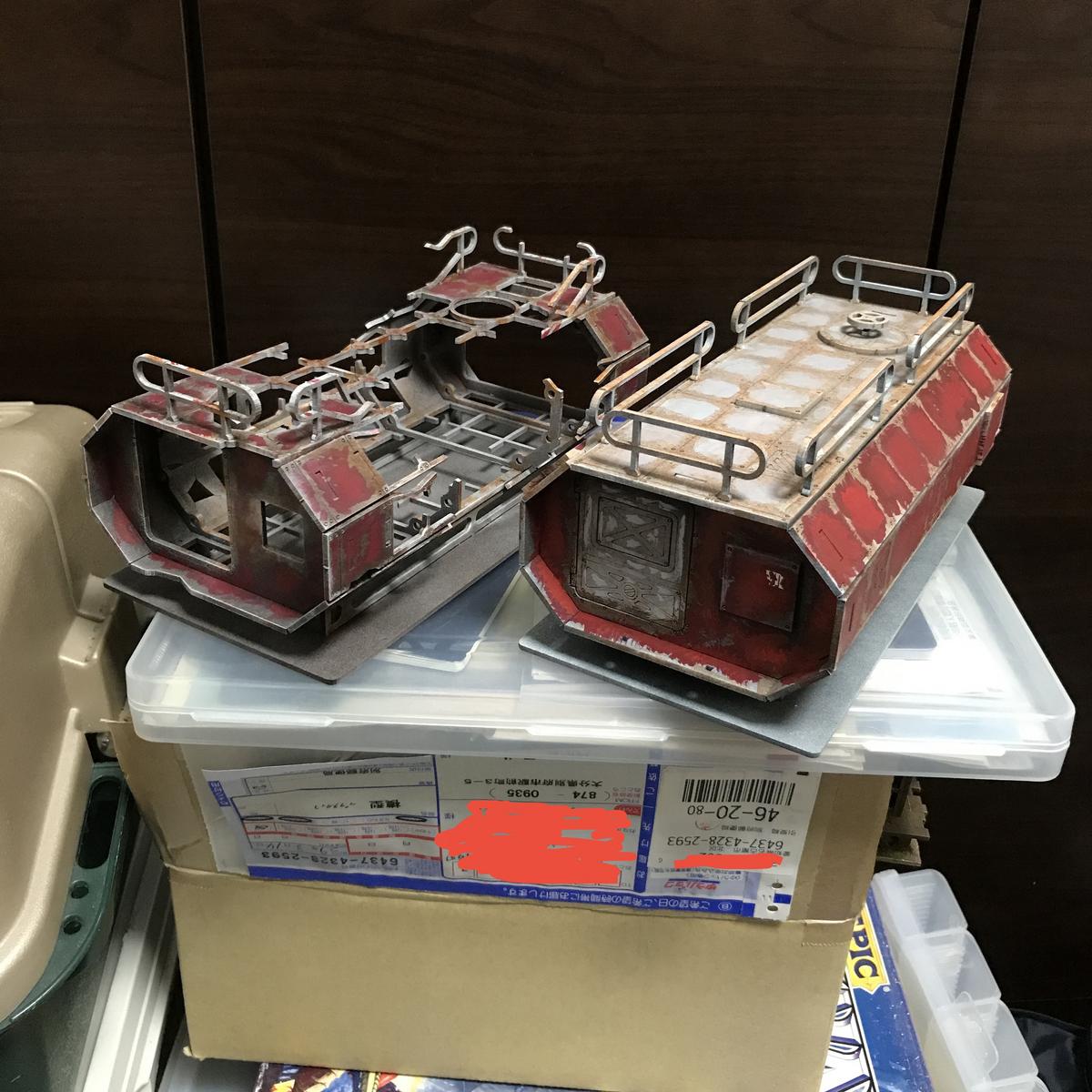 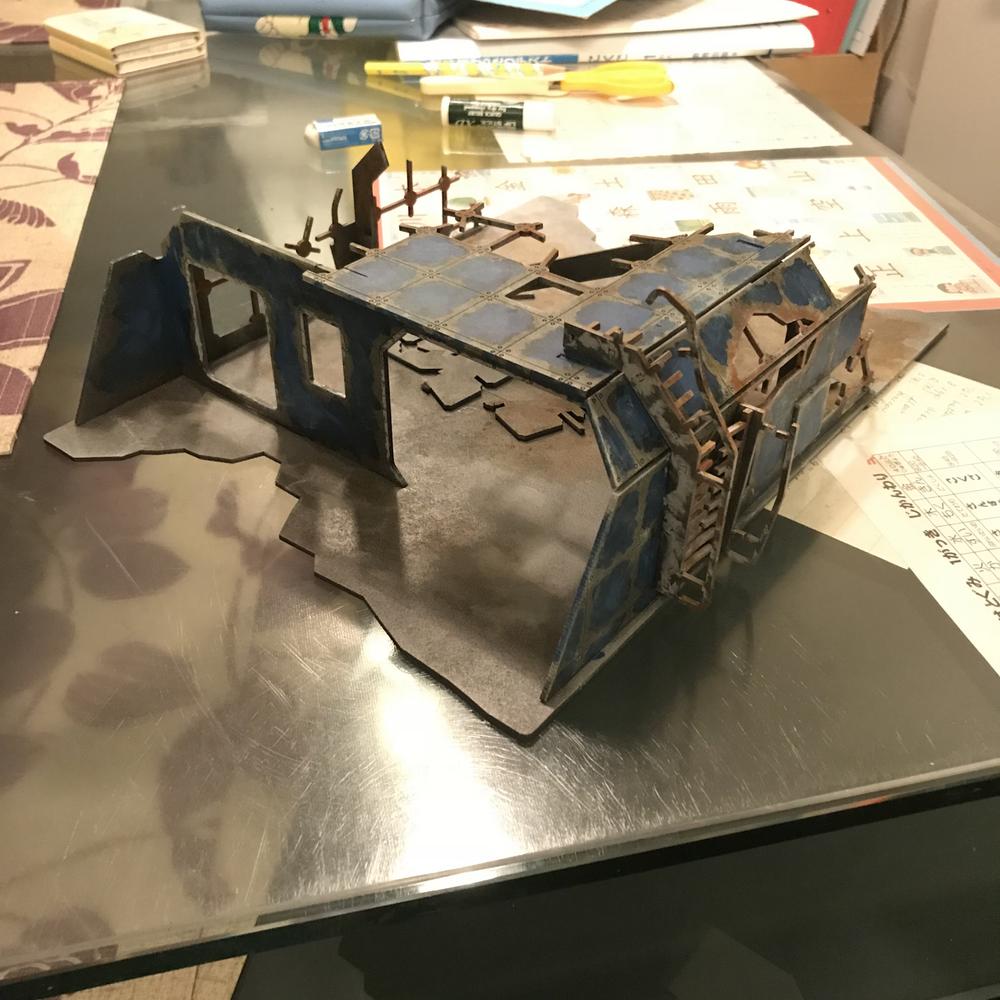 And I got this little house from their "far east" range, which works a treat for Malifaux: 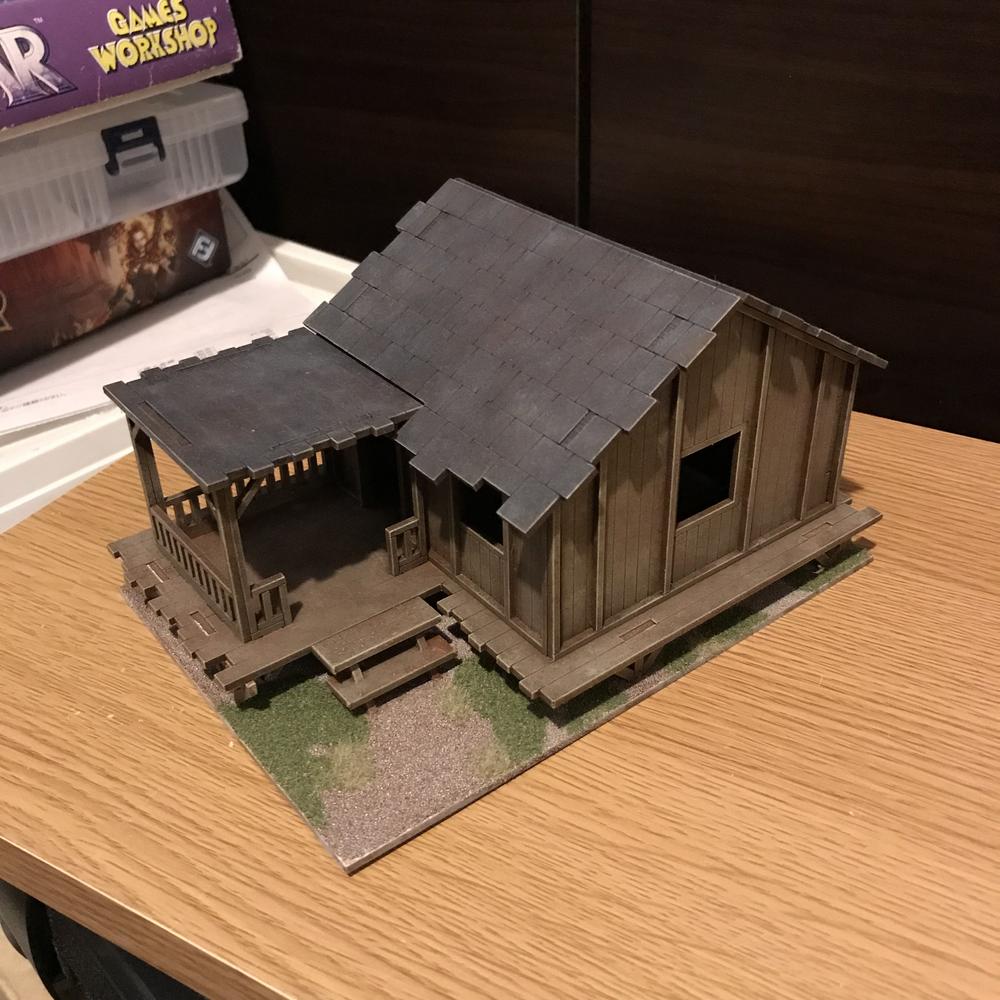 And in 15mm, the wrecked farmhouse on the left here is from Sarissa: 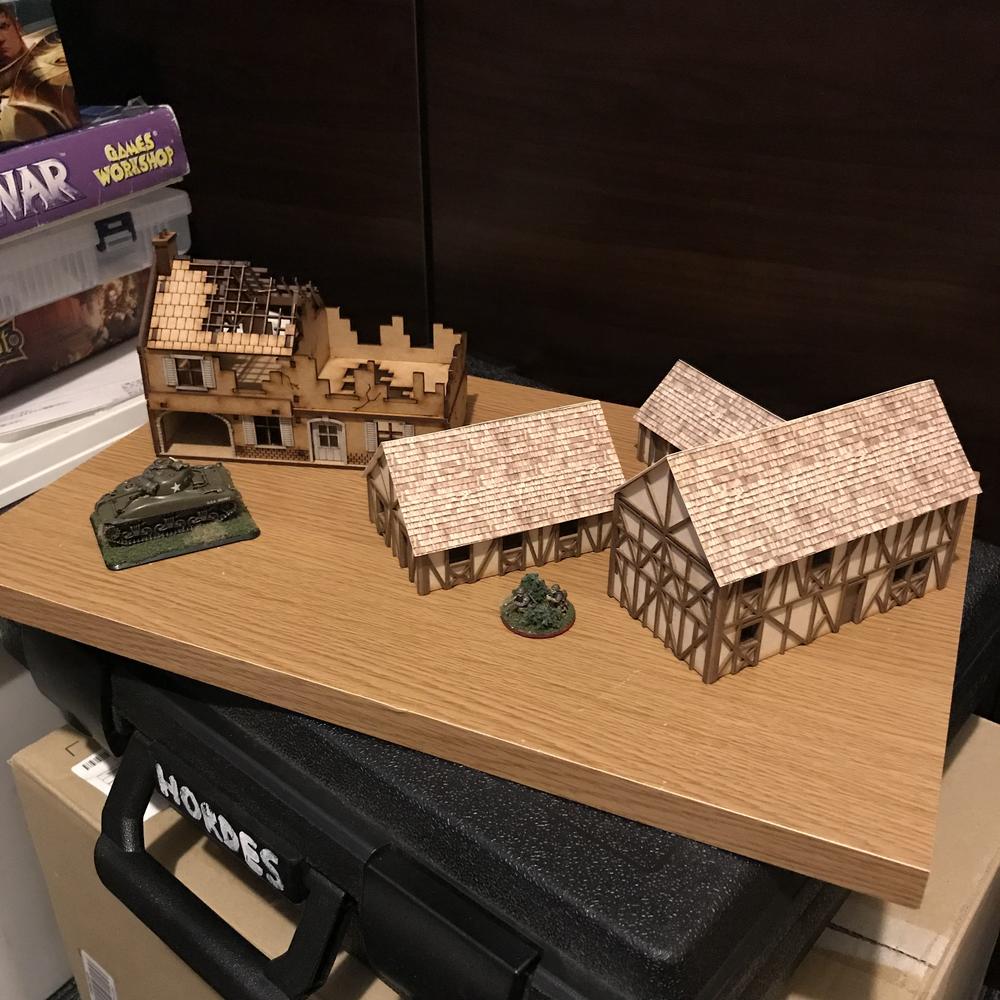 (The other two are from GameCraft, which makes good stuff but recently, like most American companies, has dropped out of the running for me because of shipping costs - flat $20 to start in their case.)

Next after Sarissa for me is TTCombat, the company behind that fantasy pro wrestling game, and who bought out Hawk recently. They've got ranges focused on 40K (SciFi Gothic), Infinity (SciFi Utopia), Necromunda (Industrial Hive) and more. Shipping is OK - it ended up being about 1/4 the total cost of an order for me - but quality is quite good and they have some very affordable stuff. Their 20GBP Ruin Sector in particular is a fantastic value (2 nice large-footprint modular ruined buildings, a couple shipping containers, 5 barricades and 3 low walls), and a good start for a 40K board. Since I'd already started on a more "generic science fictiony" board with the Sarissa pods, I didn't go that route, but I did get a set of their generators and 4 of their little (very nicely stacking) chemical storage tanks, the former from the Infinity-oriented range and the latter from Necromunda. 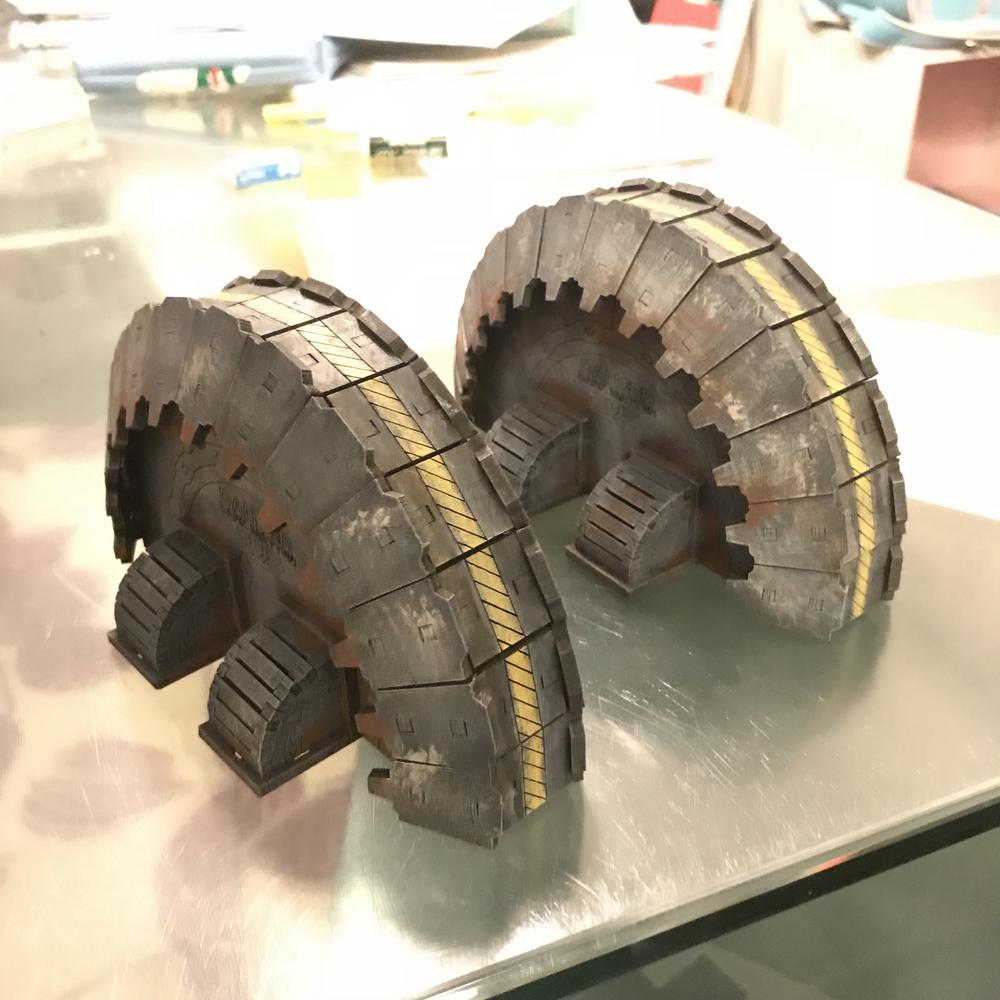 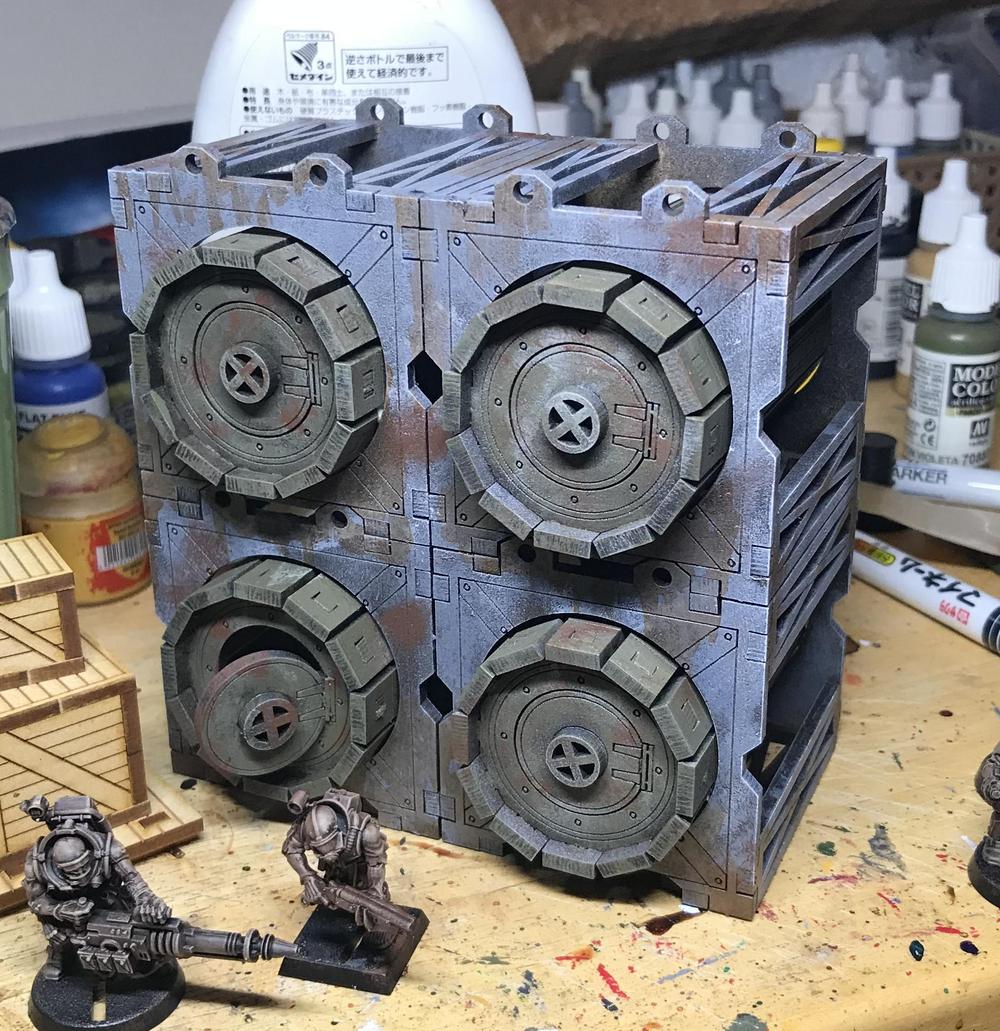 The storage tanks also came with some barrels, which I'm using for objective markers - they could work nicely in scatter terrain as well. 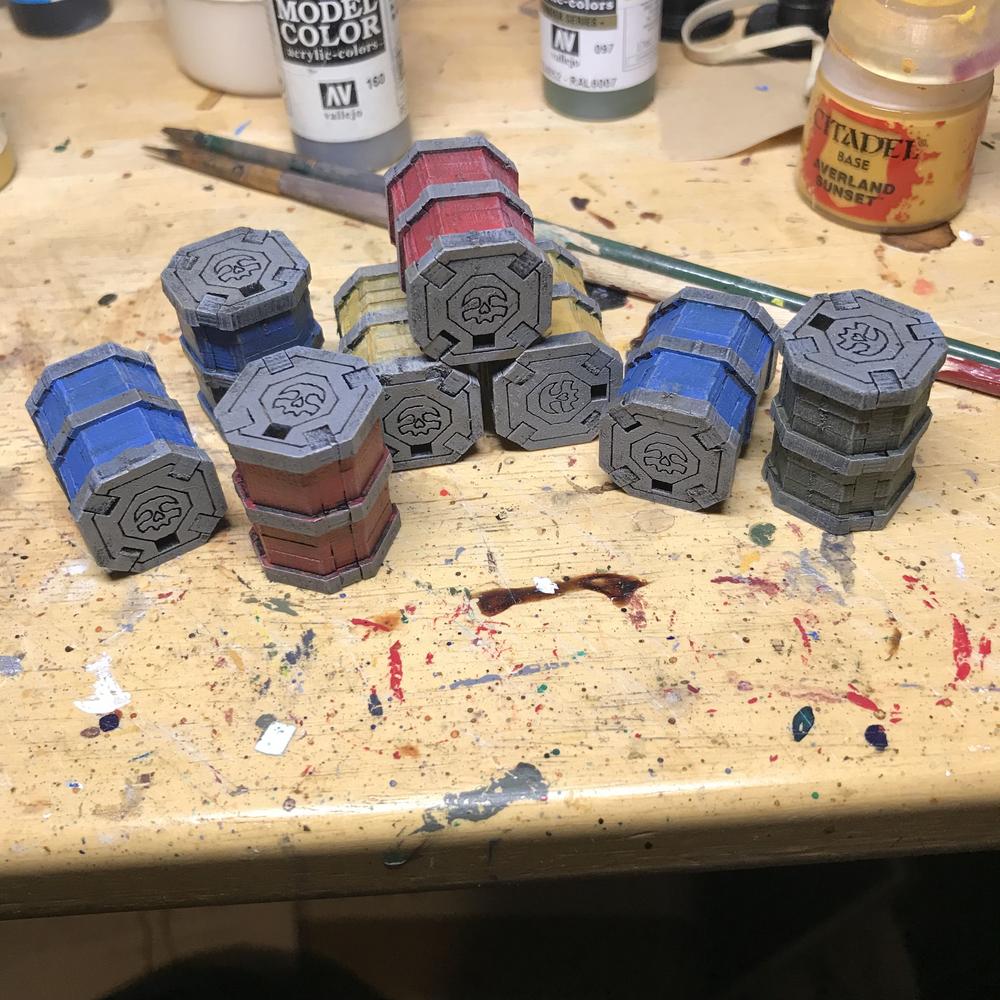 Finally, in a fairly distant third place is Miniature Scenery, which I got mostly because of Sarissa's previously-noted lack of sci-fi walls. They have a pretty good range of both fantasy and sci-fi, the latter being notable for having quite a few vehicle kits designed as relatively cheap alternatives to some GW stuff - Grot artillery and Ork buggies and battlewagons most notably, although they're now making some stuff pretty clearly designed with Nurgle in mind too. They also have some Malifaux-ish buildings too. Really, though, I wasn't too impressed. Their kits seem to have quite a lot of wiggle room, meaning things will to together at odd angles if you're not super careful, and some pieces are wobbly after going together. I got a couple sets of walls, and just for fun a pack of mini forklifts, crates and pallets - and the forklifts were a bit of a pain to put together, I tell you what. Still, they look OK, and they'll do the job. Shipping's a bit more expensive than TTCombat too. 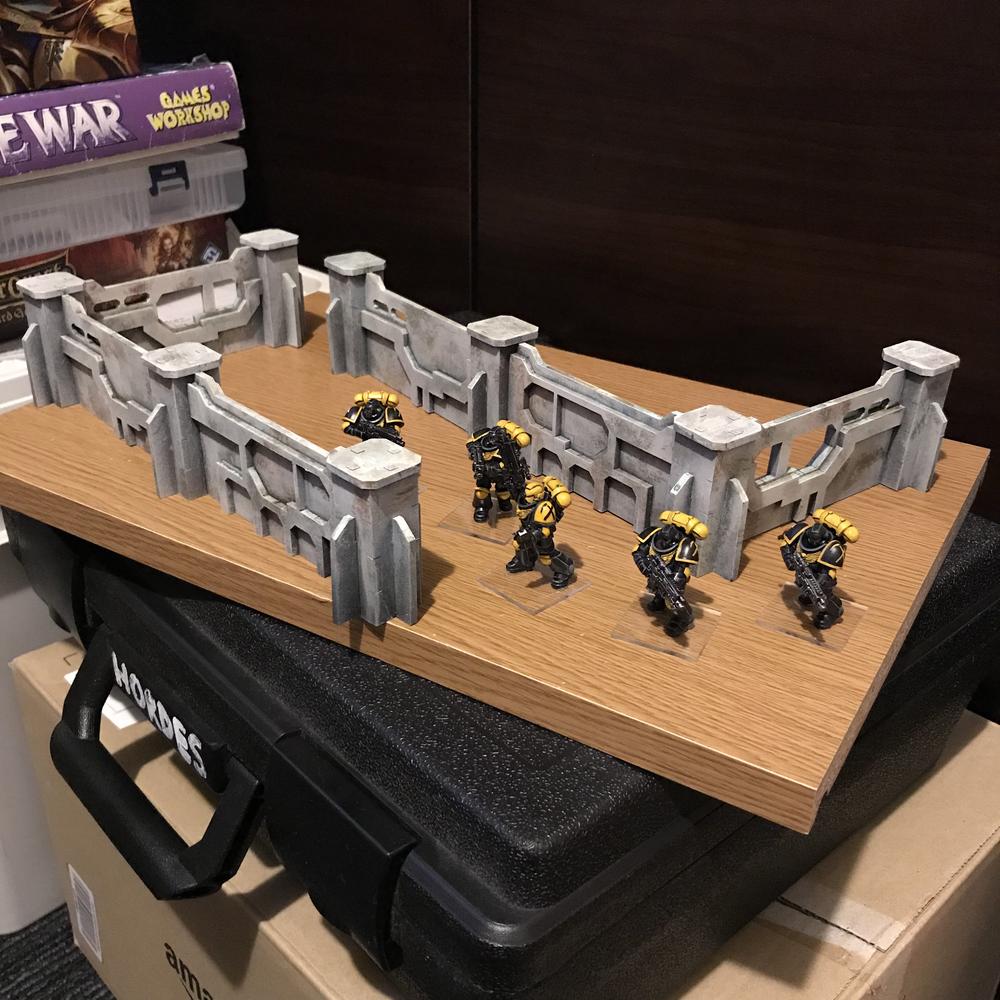 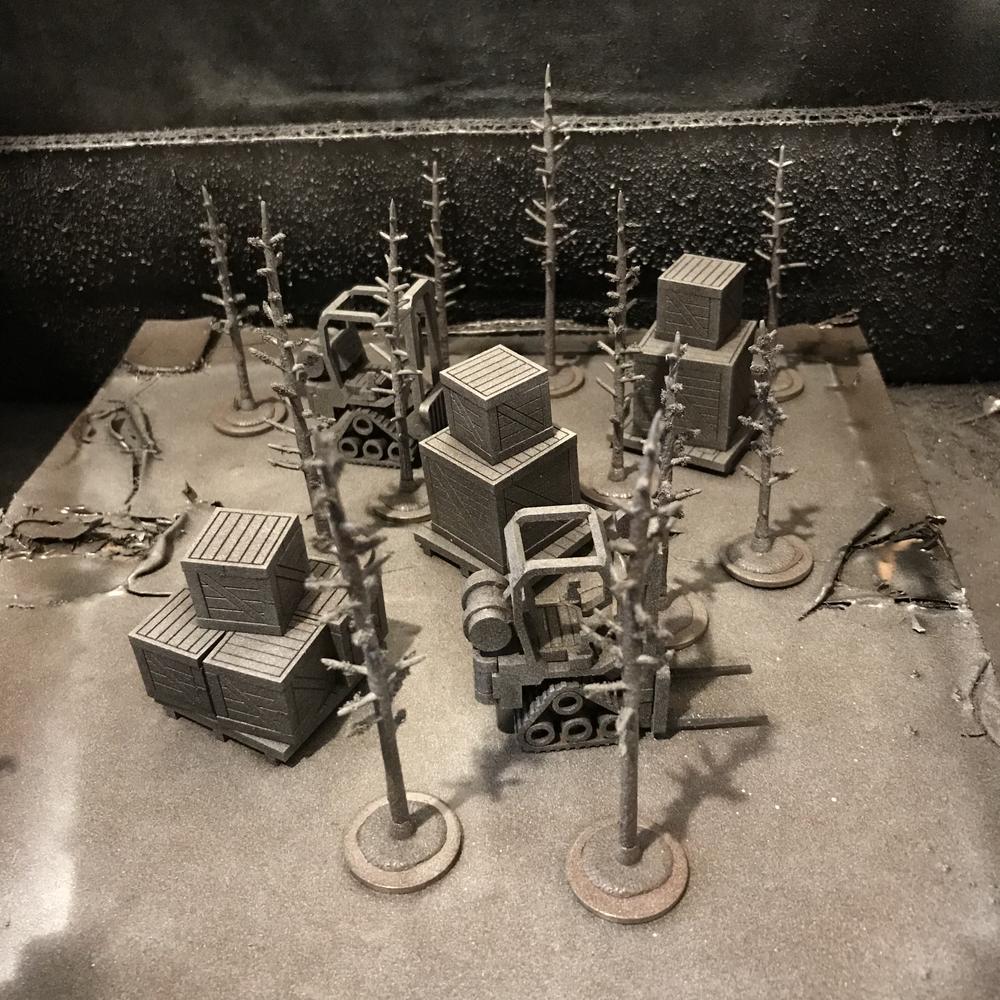 I also picked up some very cool-looking Malifaux-oriented buildings from a place called LaserCraft Workshop, and while they're nicely-designed characterful kits, it's another American company and shipping is ridiculous - I managed to get some sent to my parents' house and hitchhike in a package they were sending anyway. 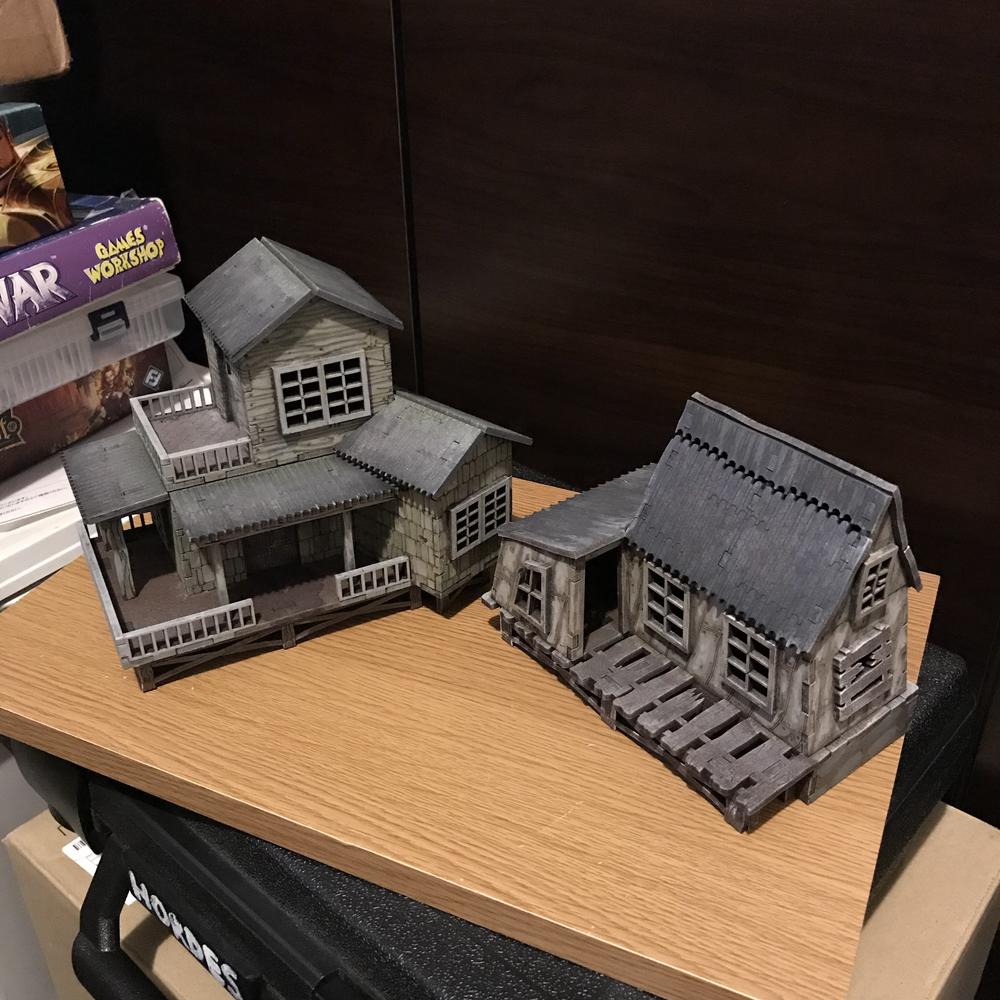 So those are my experiences with MDF scenery! I should also say to anyone balking at painting up scenery, it's really super easy. The only one of all these that took me more than an evening to finish was the LaserCraft Workshop houses, because the etched detail was so shallow that I ended up painting each board and shingle individually.

Everything else, though, painted up very quickly indeed - a couple hours at most. How about joining me as a Good Gaming Citizen and getting a table's worth of terrain for your favorite game together?

MDF has certainly taken off as a good source of cheap(ish) scenery over the past few years. I have a fair amount of stuff already and more on a wish-list.

I agree with what ToD said about Sarissa. They make some lovely kits. I have some jungle houses, a WW2 train station, some assault boats, a Japanese shrine and some medieval town houses from them to name just a few. They are reasonably priced, the quality is good and they go together easily in most cases. One of the big drawbacks of MDF is that it isn't very good for curved objects. Sarissa uses a thick cardboard to form round structures, but it doesn't always fit as flushly as their wooden parts. The assault boats were a pain in the butt to put together. For 90゜angles though, MDF is awesome and Sarissa is by far my favourite brand.

4Ground is the other big name in MDF in my opinion. This is largely due to their pre-painted ranges, which save a lot of time and effort, so you can get stuff on the table ASAP. I'm not a fan as I find a lot of their colour choices don't match what I want, and they are expensive. When I have bought their buildings, they are a lot more complex as their walls come in two sections, internal and external. That said, they do look good when they are done (odd colours aside). With a little extra work, they look great. I have some of their Anglo-saxon and Samurai ranges and they're nice kits. 4Ground also produce some fairly cheap bases and movement trays. Noticeably cheaper than Sarissa, though with less variety. If you want 4Ground, I strongly suggest waiting for Black Friday in November and placing a big order. Why?
1 - They offer a 10% discount on their regular prices.
2 - They knock off the VAT, a saving of another 16% or so.
3 - On orders over 80GBP or thereabouts they offer free shipping.

A smaller company that I have ordered from is Charlie Foxtrot. It is a small company run by a hobbyist who wanted certain buildings for himself and expanded from there. They mainly do WW2 style buildings, but he also does a range for ACW and a little bit of sci-fi/fantasy. Design-wise, his kits are a bit different from Sarissa/4Ground, but in a good way. His Russian houses look awesome. Unlike the other companies, he ships the kits already cut from the frames to save on weight. As a small business his shipping costs are not discounted and he can't deduct the VAT. Getting a bag of loose wooden parts is not ideal, but the buildings are nice!

The final company I have bought from is Knights of Dice, an Australian company. They do some gorgeous kits aimed at Batman/Modern cities and Post Apocalypse ruins. Their kits are very roomy, so you can maneuver models around inside a lot. Their kits are also incredibly tight on the tolerances. I have had to use a hammer to get bits to fit before. Price-wise they aren't bad for their size, but shipping is extortionate (They occasionally offer a discount or free shipping during a sales period. This is usually announced on their Facebook page and with very short notice).

There are another dozen or so makers I have in my favourites tab on my PC, so I'll try to post up a list at some stage. I haven't used them, but I would like to at some stage.

I recently received some Viking Longships via Yellowstreak from a company called Dark Ops. Sadly I haven't had the time to assemble them yet, but maybe Yellowstreak can offer some feedback?

Primarch wrote:4Ground is the other big name in MDF in my opinion. This is largely due to their pre-painted ranges, which save a lot of time and effort, so you can get stuff on the table ASAP. I'm not a fan as I find a lot of their colour choices don't match what I want, and they are expensive. When I have bought their buildings, they are a lot more complex as their walls come in two sections, internal and external. That said, they do look good when they are done (odd colours aside). With a little extra work, they look great.

Yeah, from what I've seen they look really flat straight out of the box, and since weathering is most of the process (or most of my process, anyway) of painting buildings you may as well just start from zero, save some money, and not have to deal with 4Ground's odd preference for colors like institution green.
Feel free to call me Dave!
-----
Miniatures painted in 2020:
AoS-iverse: 87 infantry
40K-iverse: 39 infantry, 1 monster, a whole mess of terrain
Adeptus Titanicus: 1 Titan
Top

Most of my mdf buildings are 4ground, because I don’t really like painting buildings. They are more complex with the double walls, but that also makes then pretty sturdy. Definitely look for one of their sales though and order big to get free shipping.