, Prim! You are so polite and optimistic.

I don't compare my miniatures like that, it will kill the small joy I get when I finish one for sure. I know I'm no painter, and even then I have issues dealing with the urge of throwing all my brushes through the window sometimes after seeing how well you guys paint. If I went that harsh on my stuff I'd burn it all in a big pyre.

Case in point, today's pic. I know the shoulder pads are messy as hell, but I don't have the heart to dunk him in solvent for the 4th time to tidy them up. @ToD Your stuff is great already, or at least it seems to me. 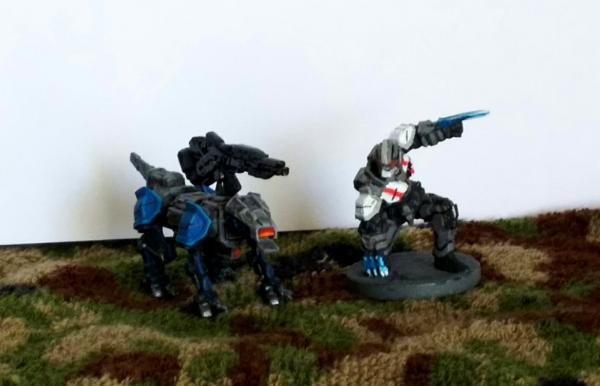 I like both EL and ES2 quite a lot - and yes, the music is unbelievable. They’re really good at designing factions with very different play styles baked in. Definitely worth a look if you’re into 4x games - just depends on if you want fantasy or sci fi.
Feel free to call me Dave!
-----
Miniatures painted in 2020:
AoS-iverse: 5 infantry
Adeptus Titanicus: 1 Titan
Top

I painted these up the other day. I like those paratroopers? jetpack troopers? The boss not so much, it's like he lost his hands and got a gun hand replacement.

Miguelsan wrote:...it's like he lost his hands and got a gun hand replacement.

The Other Dave wrote:

This image has been going around Twitter recently, and it's Relevant:

Thinking about the above, do we (hobbyists in general I mean) really need to be worrying about stuff like that? Sure, if you're aiming for a Golden Daemon or a Crystal Brush it's obviously important to get it perfect, but for most of us, I think we know where we all fit on the painting scale.
As Miguelsan says, being overly critical of your own minis kills the joy of finishing them, and I think I agree. Mind you, I'm not a great painter.

Having unrealistic expectations just seems like a good way to get stressed about things, especially so with high precision painting.
One of the things I have noticed over in the painting challenge (http://thepaintingchallenge.blogspot.com) is the wide range of skill levels between the participants. Some people are entering exquisite masterpieces and others have massed hordes of roughly dipped miniatures. Both ends of the spectrum and all that lies between get positive, encouraging responses. Skill isn't as important as making the effort it would seem.
At the end of the day we are all doing this for fun, so getting stressed about the perfect paint job seems like you are aiming for the wrong goals.

No, we shouldn't! I'm always explicitly aiming for a "good tabletop standard," whatever that means, but still I can never help but wince a bit when seeing a model blown up to three times actual size.

Yesterday I went to the Ichinomiya hobby shop for a Shadespire and painting day, and got a solid start on the Nighthaunt warband for that game (and also did the cool 4-way battle from WD a few months back where you team up to kill a giant while constantly backstabbing to make sure you're the one to get the glory for doing it) - I may wrap those guys up before going back to Blackstone, as they're turning out pretty well.
Feel free to call me Dave!
-----
Miniatures painted in 2020:
AoS-iverse: 5 infantry
Adeptus Titanicus: 1 Titan
Top

I'm chipping away at the Mantic scenery box. I already got everything painted in the base greys (boooring but it's japanese office furniture everything must be boring) and I'm scratch-building some chairs.

A couple of weeks back I painted up a new Saga army, a force of Bretons. As I am sure most of you realised, there were only 5 points of models there, not the 6 points usually used for a full game of Saga. That's because I had an extra point that was to be entered in the painting challenge bonus round. The theme of the round was Mercenaries, so I painted a unit of Viking mercs to go alongside my Bretons and fill up the army. These colourful looking chaps represent Jarl Sigvaldi and his Jomsvikings, a brotherhood of Viking warriors who would sell their services to the highest bidder. I only needed to do 4 models for the unit, but 5 came in the pack so I painted them all.
My entry for the challenge was titled: "Don't ask for credit..." "...because a refusal often offends."
This model is going to be an objective marker. It's supposed to be a victim of the Viking Blood Eagle style of execution. The victim is lashed upright between two posts, his back is then cut open, his ribs snapped with a hatchet and his back is opened up. His lungs are then pulled out of his back and placed on his shoulders. Like so. Needless to say, it is a very brutal and painful way to kill someone. In the viking sagas, there are only two recorded incidents of it happening. In both cases the victim was of royal blood and the killing was in revenge for a death in a family. If you're a fan of the Vikings TV show, you've probably heard of this before. The models are all from a company called Footsore minis and they were beautiful casts and very detailed sculpts. Large quantities of Tamiya Clear Red were used in the production of the Blood Eagle if anyone was wondering.